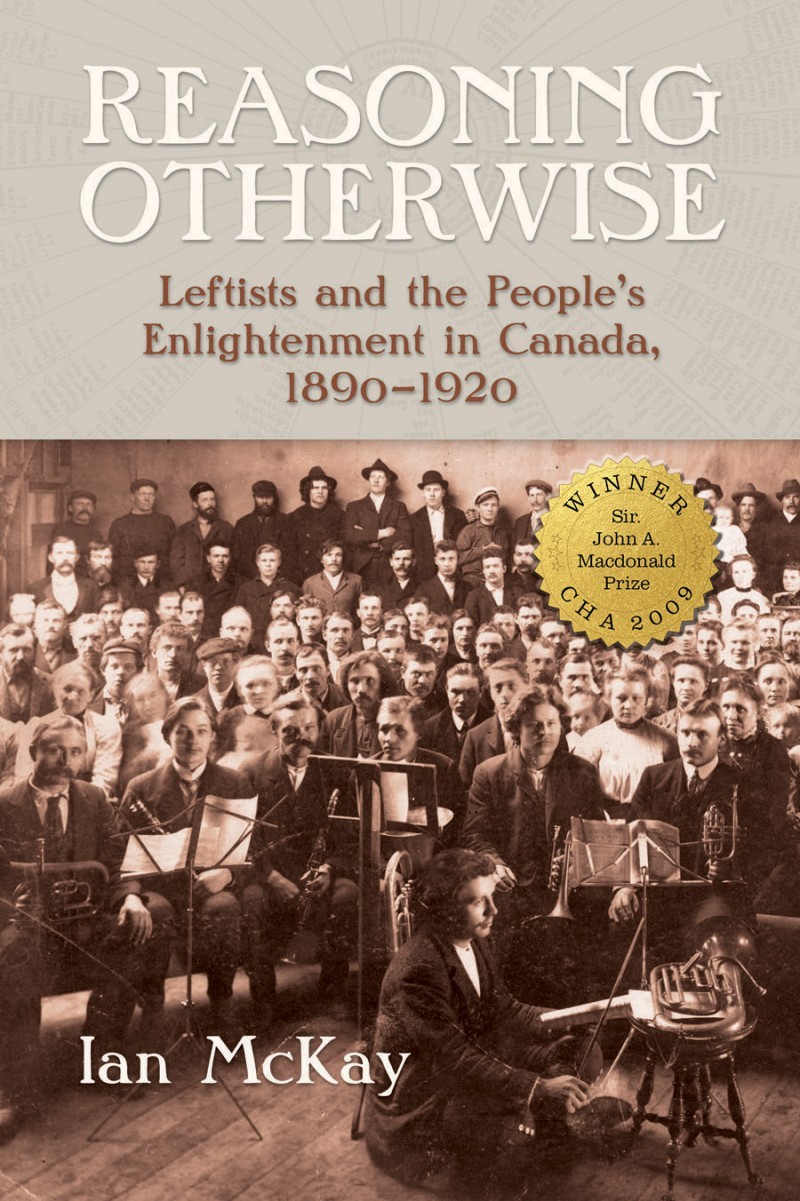 Leftists and the People’s Enlightenment in Canada, 1890-1920

In Reasoning Otherwise, author Ian McKay returns to the concepts and methods of “reconnaissance” first outlined in Rebels, Reds, Radicals to examine the people and events that led to the rise of the left in Canada from 1890 to 1920. Reasoning Otherwise highlights how a new way of looking at the world based on theories of evolution transformed struggles around class, religion, gender, and race, and culminates in a new interpretation of the Winnipeg General Strike of 1919.

As McKay demonstrated in Rebels, Reds, Radicals, the Canadian left is alive and flourishing, and has shaped the Canadian experience in subtle and powerful ways. Reasoning Otherwise continues this tradition of offering important new insight into the deep roots of leftism in Canada.

Reasoning Otherwise is a substantial achievement. It is provocative, original, and contains numerous flashes of insight that will provide scholars and students of the left with many questions to ponder and points to challenge for years to come.

A fascinating and comprehensive account that will undoubtedly become the benchmark for studies of the period … it has greatly enhanced both our understandings of the Canadian Left and of Canadian cultural history more broadly.

Essential reading for historians of labor and the left as well as of North American history more generally. It is one of those rare books that inspire you to throw out your undergraduate lecture notes and to start anew.

Reasoning Otherwise is an excellent resource for anyone interested in left politics before the First World War, whether in Canada or internationally.

A first-rate history that deserves a wide readership. The American historian Jack Hexter once said that some books should be authorized to put on their covers: “Pay attention! Listen to me! Follow along! Have fun!” This is such a book.

As Ian McKay effectively demonstrates in this sweeping and incisive reconnaissance into the era, a rich, first formation socialism (to use his term) set itself against the emerging liberal social order and attempted to ‘reason otherwise’… We [need to] sharpen our own analytic tool to understand the multiple and varied ways in which liberalism creates its opponents. McKay’’s book is a crucial contribution to this task.

Like many books that are able to come up with some really key, wide-ranging insights, Reasoning Otherwise is both interdisciplinary and accompanied by an innovative and original methodology….acts as incitement for other scholars and students to delve deeper into the complicated construction of the left.

This is no misty-eyed nostalgic romp; McKay writes openly of the sexism, classism, and racism that plagued the left during those years and to which many on the left were obviously blind. In retrospect we can see how socialism has taken on more humanist values in response to the changing of the lens through which we view social problems.

This is all good to know. For the next time.

At once erudite and accessible, shrewdly critical and generously inclusive, Ian McKay shows a deep admiration for and a profound understanding of all those activists who railed against the liberal mainstream and sought to make their societies more egalitarian and democratic… just the kind of critical analysis and inspiration that students of the Canadian left have long been seeking.

A superb study of dedicated, intelligent men and women, their engagement with important issues, and their remarkable success at helping to shape working-class struggles. A must for anyone interested in Canada’s political traditions and contemporary movements on the left.

This book tells you all you want to know about the genesis of Canadian socialism… Reasoning Otherwise will become the definitive text for the foreseeable future.