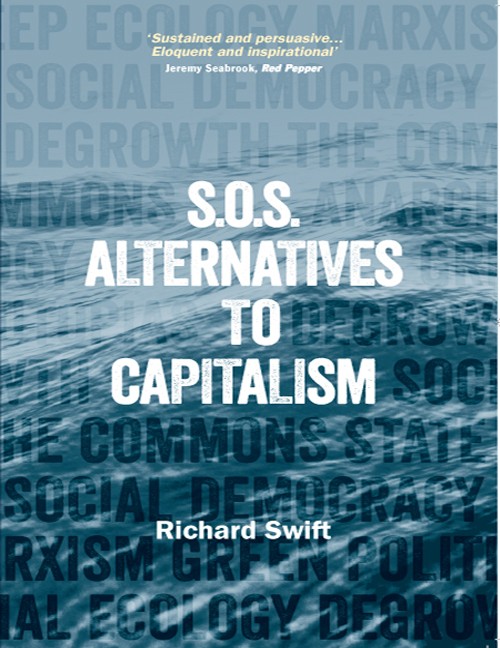 Financial collapse and crisis; disgust at bankers’ greed; the devastating effects of yawning inequality: all these and more have led to widespread dissatisfaction and disenchantment with capitalism. People are crying out for an alternative but are continually told that one does not exist.

In this fully updated new edition Richard Swift examines the past shortcomings and present health of not one but many other paths to changing the world, including socialism, social democracy, anarchism, ecology, and degrowth.

Combining the practical with the visionary, he shows that finding alternatives to capitalism is no longer an academic issue for the left – it is an urgent planetary necessity.

Richard Swift’s S.O.S.: Alternatives to Capitalism makes a major contribution to changing the parameters of political debate. It helps us move beyond the pseudo-alternatives of the political mainstream and begin to work for the kind of change we can believe in without being delusional. We need serious and widespread discussion of Swift’s central thesis that a reinvigorated left politics focused on policies such as degrowth, control of capital, and a guaranteed income can lead us toward the overarching goal of a just, compassionate, ecologically sound and democratically self-managed post-capitalist society.

Where is the world headed? In the era of multiple crises that have taken the planet by a storm, Richard Swift’s thoroughly researched and timely book takes a much-needed view of the alternatives that existed – and still exist – beyond capitalism. The point that emerges through this book is singularly important: that the survival of our planet is more important than that of any one “ism”.

– Jaideep Hardikar, journalist and author of A Village Awaits Doomsday

This critical book will be controversial for much of the left from social democrats to autonomists, but it opens many much-needed crucial questions. It is grounded in an impressive base in the literature of alternatives to capitalism and in a wide knowledge of many social movements around the world. Swift’s creative approach to imagining alternatives to capitalism has sparked this reviewer’s imagination, and I hope it will yours.

Richard Swift strikes a fine balance between denunciation of an ecocidal commitment to economic growth that is overwhelming the planet, and an elaboration of the thousands of candles of hope that lighten the gloom. His book is full of brilliant ideas – “escaping the tyranny of the economy”, “surviving progress”, “transcending a destabilizing market rationality”… It is exhilarating to read of the multiple possibilities that already exist and can serve as an energizing inspiration to action… The formulation of ecosocialism – that we court catastrophe unless we limit our predations on the planet – is too negative, and requires a positive, emancipatory slogan. Richard Swift’s book, eloquent and inspirational, is certainly a movement in that direction.

Commendably judicious… With S.O.S.: Alternatives to Capitalism, Swift joins a growing strand of 21st-century literature that explores radically different ways of organizing our economy and politics.

Swift guides his reader through a troubling political history of 20th-century capitalism and its stunted alternatives. He then explores ways out of our death trap known as business-as-usual. A genuine invitation to both dream and recover from a nightmare.

Richard Swift knows that our planet and its people are in big trouble. Hence his title S.O.S. Yet his examination of the causes and the possible solutions is thoughtful, historical minded and humane. I came away from S.O.S. with the comforting sense that there was an enjoyable world before capitalism and there can be one after.

– Barbara Garson, playwright and author of Down the Up Escalator: How the 99% Live

This timely book is required reading for the conversation we need to have.