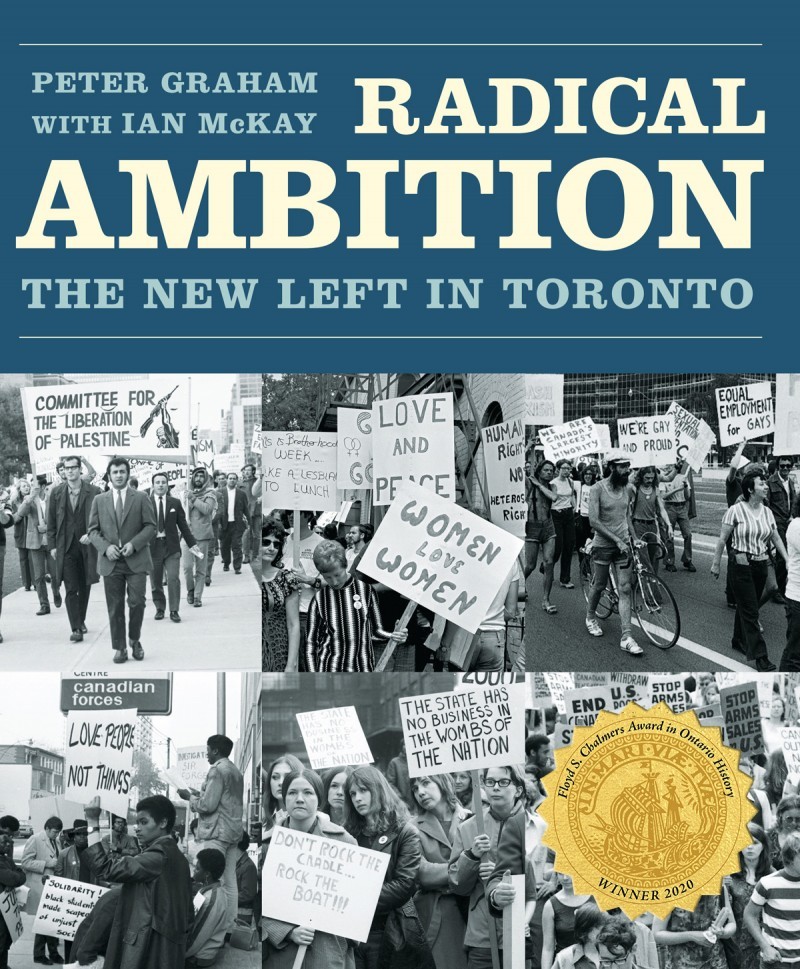 Writing for Maclean’s magazine in 1965, Peter Gzowski saw something different about the new generation of the left. They were not the agrarian radicals of old. They did not meet in union halls. Nor were they like the Beatniks that Gzowski had rubbed shoulders with in college. “The radicals of the New Left … differ from their predecessors not only in the degree of their protest but in its kind. They are a new breed.” Members of the New Left placed the ideals of self-determination and community at the core of their politics. As with all leftists, they sought to transcend capitalism. But in contrast to older formations, New Leftists emphasized solidarity with national liberation movements challenging imperialism around the world. They took up organizational forms that anticipated—in their direct, grassroots, community-based democracy—the liberated world of the future. Radical Ambition is the first book to explore the history of this dynamic movement and reveal the substantial social changes it won for the people of Toronto.

Exhaustively researched and engagingly written, Radical Ambition gives a lively description and penetrating analysis of virtually every significant episode and group involved in the Toronto New Left’s historic and diverse movement of radical resistance—a movement with a legacy that resonates still. For those who were there it is enlightening. For those who were not, it will be inspirational.

“Radical Ambition’s phenomenal evocation of the dynamic and tumultuous New Left in Toronto in the last great wave of radicalization, and its assessments of the dead ends and enduring legacies of that time, provide extraordinary insight into what can be re-imagined and reworked into a politics for today.”

– Varda Burstyn, writer, activist and independent scholar, author of Water Inc. and The Rites of Men: Manhood, Politics and the Culture of Sport

“Sweeping in scope and meticulous in detail, Radical Ambition tells the complex, passion-filled story of Toronto’s New Left from its initial stirrings in the late 1950s to its “long, ambiguous goodbye” in the early 1980s. These pages suggest that a host of lessons, both positive and negative, can be drawn from the experience of tens of thousands who envisioned and fought for a changed metropolis in a changed world.”

– Max Elbaum, author of Revolution in the Air: Sixties Radicals Turn to Lenin, Mao and Che

“What a remarkable book in terms of its depth and breadth. It captures the tenor, tone and tensions of radical Toronto politics with its local, national and international permutations; and in relation to socialism, gender, race, class, sexuality. This textured and layered study captures the radical spirit of the sixties through to the eighties, shattering the myth of Canadian innocence while making a unique contribution to global radical history, documenting a sense of hope and resistance at a time when a radical shift in the practice of politics is in dire need.”

– David Austin, author of Moving Against the System, Dread Poetry and Freedom, and Fear of a Black Nation

“This is a wonderfully told tale of youthful energy, bottomless commitment, amazing creativity, and bold challenges to all aspects of social, cultural, and political life—a story that badly needed to be told. Impressively researched and beautifully written, it brings to life the aspirations of a passionate generation of activists and the remarkable impact they had. A brilliant and fascinating reconstruction of one of the richest periods in political ferment in Canadian history.”

“Graham and McKay deliver a superb and comprehensive overview of the Toronto New Left in the long 1960s. Like similar moments in the 1880s and the 1930s, the 1960s represented a high point of anti-capitalist struggle with innovative forms of resistance which rippled through Canadian society and culture. From the early anti-nuclear, civil rights, student, and anti-war movements to the new Trotskyist and Maoist formations, the fight for the environment, and the emergence of Black, Indigenous, women’s, and gay liberation movements, the New Left experience still resonates with a re-emergent socialist politics.”

“Graham and McKay bring the period’s activists to life and manage to balance the numerous political differences and “lines of demarcation” insightfully. The authors analyse not only political organizations—from the Waffle/NDP to the Maoist party formations—but also the various municipal struggles around expressways and education, the anti-war movement, as well as the movements around identity and sexuality. It even includes an account of the cultural left, a topic often overlooked in political histories. One of a new crop of engaging Toronto histories coming out of BTL. Local and world class. History otherwise.”

“Anyone investigating the global New Left should pay close attention to Radical Ambition.”