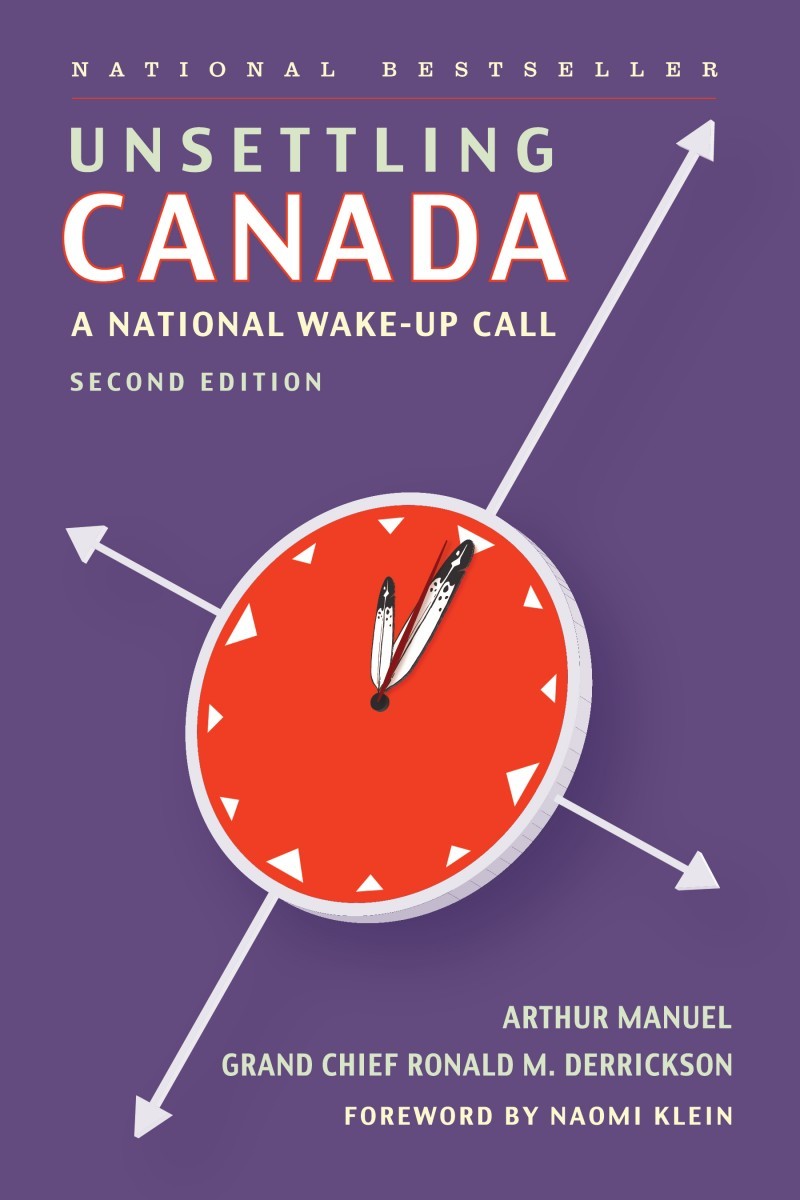 A Canadian bestseller and winner of the 2016 Canadian Historical Association Aboriginal History Book Prize, Unsettling Canada is a landmark text built on a unique collaboration between two First Nations leaders.

Arthur Manuel (1951–2017) was one of the most forceful advocates for Indigenous title and rights in Canada; Grand Chief Ron Derrickson, one of the most successful Indigenous businessmen in the country. Together, they bring a fresh perspective and bold new ideas to Canada’s most glaring piece of unfinished business: the place of Indigenous peoples within the country’s political and economic space.

“I know Arthur Manuel as a strong and wise leader, seasoned in the long battle that has been his life. To read this book, his detailed and very personal history of the long struggle of Indigenous people in Canada, is to go through an emotional rollercoaster of disillusionment, despair, flinty resolve, and, finally, growing hope, building to a present in which the struggle for their rights continues. This is not history buried in the past, it is going on right now and as Canadians we are all a part of it.”

“Unsettling Canada is a breathtakingly beautiful story of Indigenous resistance, strength, and movement building. Unsettling Canada echoes the power of George Manuel’s The Fourth World, centering the heart of the narrative deep inside a kind of Indigenous intelligence rarely shared outside our communities. This is the critical conversation that Canada and Indigenous peoples must have because it is centred on land, and, therefore, it is one of the most important books on Indigenous politics I’ve ever read.”

– Leanne Betasamosake Simpson, author of As We Have Always Done and Dancing on Our Turtle’s Back

“When I was a child, I met Art Manuel’s father, the distinguished George Manuel, many times as he and my father, William McGrath, worked together to improve the law and living conditions for incarcerated youth and First Nations. Art Manuel has carried on his father’s legacy fighting for justice. In Unsettling Canada, he shares his own incredible journey with its trials and triumphs.”

– Maude Barlow, Chairperson of the Council of Canadians

“For those of us with enough winters to remember George Manuel in life, reading his son’s Unsettling Canada can be an almost eerie experience. No book of which I’m aware has ever conveyed with such clarity the continuities of voice and principle across generations in the Fourth World struggle for self-determination. Even we who might question whether liberation can be achieved non-violently, as Manuel believes, have much to gain from his consistency and strategic vision.”

– Ward Churchill, author of Struggle for the Land

“Unsettling Canada tells a captivating narrative of activism, identity, and lived experience, tracing Indigenous rights and land claims struggles in this country between the 1960s and 2000s. Manuel and Derrickson engage with the history of political activism as insiders. Hence, the book makes an important contribution on this understudied period through personal insight on everything from the internal debates within the grassroots movement for equity and sovereignty, to how leaders balance the pressures of activism and family life. Not only is the book highly readable and broadly accessible to those in this country, it has an even wider reach in scope as it demonstrates the impact of Indigenous people from Canada like Manuel had on the global stage and in global activists’ strategies. The book is grounded in Indigenous intellectual traditions and perspectives, and carries the timely message about how bringing justice to Indigenous peoples will also create a more sustainable Canada.”

“Arthur Manuel passionately builds a detailed historical analysis of creative and determined Indigenous movement-building, grounded in the day-to-day harsh reality most Indigenous peoples continue to live. It is an engaging and vivid memoir that demonstrates how critical legal victories are embedded in and reliant on grassroots political movements that have a global reach. Offering many organizing lessons, this book is a frank and inspiring call to action in support of Indigenous sovereignty, including building alliances with and involvement of non-Indigenous people, whose future is inseparable from Indigenous struggles for the realization of inherent rights to self-determination.”

“Few books deal so compellingly with the historical development of Canada’s laws and policies related to Indigenous peoples and set within the context of struggles to defend Indigenous lands. Unsettling Canada is invaluable for its direct and honest account of the issues, the players and the politics behind the Indigenous movement.”

“Art Manuel is like a tall cedar, watching the landscape of Canadian Indian policies through time and offering sturdy and dependable resistance. In Unsettling Canada his account of our recent history is dense with compelling personal stories, behind-the-scenes political anecdotes, an honest account of the dynamics of Indigenous activism, and revealing insights about the continuity of colonialism. In the often difficult conversation about Indigenous politics in Canada, Manuel offers us shade to reflect on our past and consider the future. This is a rigorous but very accessible and vitally important book.”

“Based on his experience as a leader and activist, Arthur Manuel recounts key moments in the struggles of Canada’s Aboriginal population over the past fifty years. Part memoir, part political statement, Unsettling Canada is an insightful and articulate account of the challenges governments and Aboriginal people face in resolving disputes between them.”

“I cannot recommend this book too highly: it weaves together a compel- ling life history, an account of the last nearly fifty years of Indigenous activ- ism, and a relentless and compelling criticism of the doctrine of discovery that continues to underlie Canadian claims to Indigenous land. Everyone in Canada should read this book; if they did we might become a better country!”

“Unsettling Canada should be truly unsettling to many Canadians. Canada’s treatment of Aboriginal people and their struggle to have a chair at the country’s political table reveals an almost Machiavellian sense of politics. No wonder the life expectancy of Native people is substantially lower than non-Natives. It’s the sense of heart-rending frustration and the collective banging of heads against the wall that probably kills us.”

– Drew Hayden Taylor, author of Me Funny and Me Sexy

“Written by Arthur Manuel, one of our most respected and incisive leaders and thinkers, Unsettling Canada is a must-read for anyone serious about radically transforming the colonial relationship between Indigenous nations and the Canadian state.”