How to Stop the Tax Cut Scam and Save Canada

Edited by Richard Swift  As told by Canadians for Tax Fairness 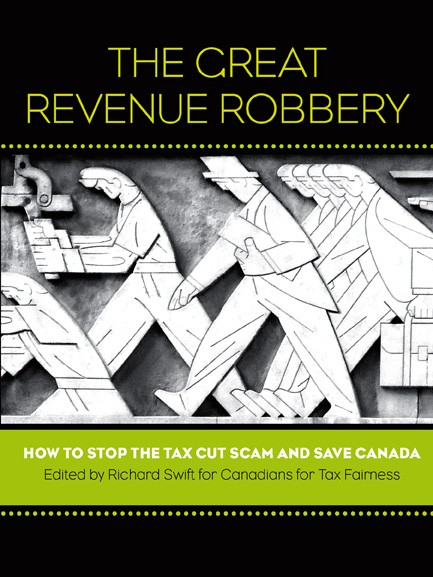 Any attempt to restore responsible environmental policies, revive and expand our social programs, rebuild our crumbling infrastructure, and boost our flagging economy will be inadequate unless we also address the need to increase governments fiscal capacity. The tax system can also play a key role in closing the gap between rich and poor–a gap that is undermining the health of our economy and threatening damage to our democracy.

Until recently, many progressive groups, including progressive political parties, have shied away from advocating for tax fairness and tax reform, fearing that the issue is political dynamite. Right wingers have encountered little opposition to their calls for deep tax cuts, especially for the rich and for corporations.

But the tide is turning. Public opinion polls tell us that faced with growing inequality and cutbacks to government programs, Canadians now strongly support tax fairness, including higher taxes on the rich and on corporations. The Great Revenue Robbery is a collective effort to stimulate much-needed discussion about how tax policy can help rebuild our social programs, reduce the gap between rich and poor, restore environmental responsibility, and revitalize our country’s democracy.

For decades, the right has flooded the airwaves and taken over the political podiums with its anti-tax hysteria. But Canadians are waking up to the simple truth that taxes are the price we pay for civilization, and that scrimping on taxes means scrimping on civilization. This collection of compelling essays deconstructs the misinformation spewing out of right-wing think tanks and media outlets, and reminds us that a far better social order is tantalizingly within reach.

This is a welcome critique of conventional economic wisdom. If you thought tax cuts would solve all of your problems, read The Great Revenue Robbery and think again.

The Great Revenue Robbery is a rallying cry for a just society. Special-interest lobbying has hollowed out the tax system. Corporations and wealthy elites have shifted their wealth and income to tax havens, and the mainstream media have polluted democratic politics with a trenchantly anti-tax agenda. This book explores this attack on tax and identifies potential progressive counterattacks, for example through financial transaction taxes, environmental taxes, and tackling tax havens. As the climate and economic crises deepen, the case for progressive taxes becomes more compelling by the day. Aux armes citoyens!

Over the past thirty years the prevailing neo-liberal ideology has framed taxes as fundamentally illegitimate. In exposing this big lie, The Great Revenue Robbery compellingly demonstrates the crucial and varied role of taxes in a flourishing democracy. If you want to understand what went wrong in Canadian public policy and how it can be fixed, you should read this book.

– Neil Brooks, professor of tax law and co-author of The Trouble with Billionaires