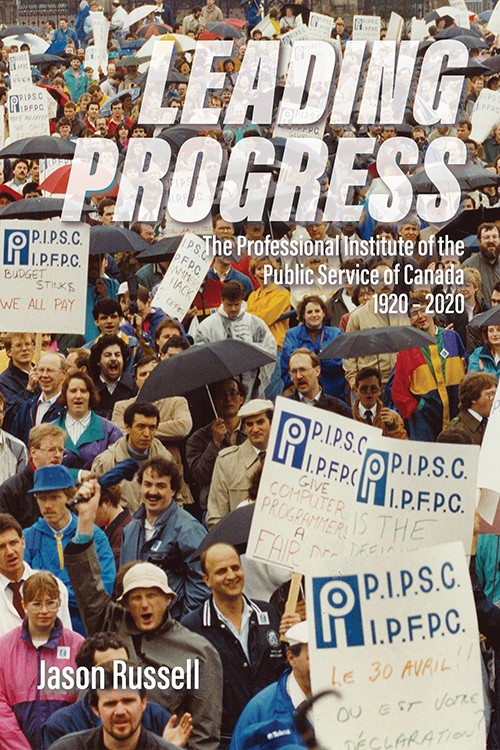 The Professional Institute of the Public Service Canada 1920–2020

On February 6, 1920, a small group of public service employees met for the first time to form a professional association. A century later, the Professional Institute of the Public Service Canada (PIPSC) is a bargaining agent representing close to 60,000 public sector workers, whose collective efforts for the public good have touched the lives of every Canadian.

Published on the centennial of PIPSC’s founding, Leading Progress is the definitive account of its evolution from then to now—and a rare glimpse into an under-studied corner of North American labour history. Researcher Dr. Jason Russell draws on a rich collection of sources, including archival material and oral history interviews with dozens of current and past PIPSC members. The story that unfolds is a complex one, filled with success and struggle, told with clarity and even-handedness.

After decades of demographic and generational shifts, economic booms and busts, and political sea change, PIPSC looks toward its next hundred years with its mission as strong as ever: to advocate for social and economic justice that benefits all Canadians.

“Russell uses the oral histories to great effect….Leading Progress is an enjoyable read and important contribution that will be of interest not only to members of PIPSC, but also to those interested in organized labour and the public sector.”

“A clear, thorough study of a large, important group of Canadian public-sector workers—the professionals—who were historically cautious unionists more inclined to collaboration than confrontation, until neoliberal governments disrupted their working lives. Jason Russell has made excellent use of the substantial archival record, but even more impressively, he has woven in the voices of a large number of union members he interviewed. A useful addition to the shelf of modern labour history.”

“Jason Russell’s stirring and comprehensive history of the first century of PIPSC’s innovative organizing among public professionals tells a marvellous story about the power of unionism—not just to lift the standards of work, but to build a stronger economy and society.”

“The many characters, communities, and causes that Leading Progress captures accurately depict the heart and soul of all unions, past and present. With density now greatest in the public sector, the value of professional associations has never been more important.”

“Public sector unions remain one of the most vital structures for the protection of workers’ rights, but they also underpin many important values of our democratic institutions, including independence, neutrality, the unbiased use of evidence, equal treatment, and inclusion. In this excellent history, Jason Russell reminds us that we cannot rely on politicians alone to protect the values of our democratic system, and PIPSC exists to defend not only their hard-won rights, but also the rights of all Canadians.”

“In Leading Progress, Jason Russell has accomplished a rare feat. He has written a book that is at once an incisive overview of labour and working-class history, as well as a detailed institutional biography that vividly captures the birth and transformation of the PIPSC from one of reluctant unionism to being at the centre of many of today’s most pressing struggles for social and economic justice.”

“In a crisis, the value of Canada’s professional public service is suddenly obvious to everyone. But in “normal” times, whether they know it or not, Canadians owe a debt of gratitude to the dedicated men and women who ensure the safety of our food and the health of our environment. I’m delighted we now have a rich history of PIPSC’s remarkable story.”

“Leading Progress fills an important gap in labour studies literature, as it considers public employees and professionals, two constituencies whose unions are often understudied. By looking at the history of PIPSC inside and out, it gives a voice to many staff, leaders, and members of the organization through extensive interviews, showing that a union is not only a structure but also the reflection of workers’ identities and the ways they relate to their jobs as well as their communities.”

“Leading Progress, given the COVID-19 crisis, is a timely reminder of the profound importance of having and maintaining a professional public service. This is a history of a union and more. Important questions of capacity, professional autonomy, and democratization of administration are raised throughout—and, crucially, the relationship of professional workers to the state as employer and the broader labour movement and working class.”

– Bryan Evans, Professor in the Department of Politics and Public Administration, Ryerson University

“Leading Progress is an illuminating, comprehensive, and candid history of the Professional Institute of the Public Service of Canada. Jason Russell’s account of how PIPSC continually balanced its goals of representing professional public servants and non-partisanship—even as it became a sophisticated union increasingly engaging in advocacy, defending expertise and scientific expertise, and responding to the needs of the many professional groups it represents—is alone worth the read.”