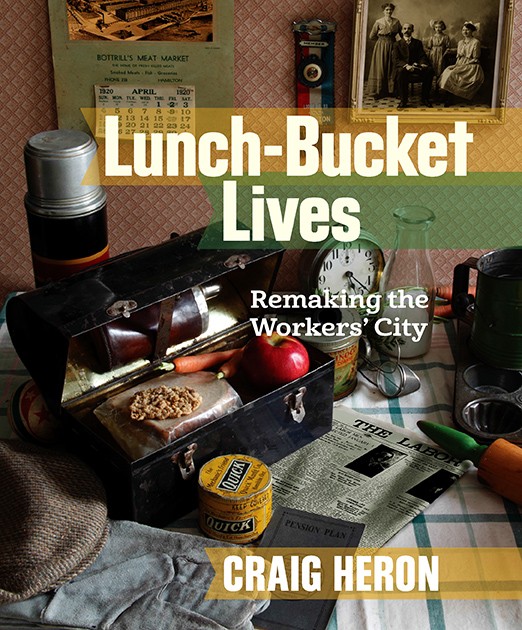 Lunch-Bucket Lives takes the reader on a bumpy ride through the history of Hamilton’s working people from the 1890s to the 1930s. It ambles along city streets, peers through kitchen doors and factory windows, marches up the steps of churches and fraternal halls, slips into saloons and dance halls, pauses to hear political speeches, and, above all, listens for the stories of men, women, youths, and children from families where people relied mainly on wages to survive.

Heron takes wage-earning as a central element in working-class life, but also looks beyond the workplace into the households and neighbourhoods—settlement patterns and housing, marriage, child care, domestic labour, public health, schooling, charity and social work, popular culture, gender identities, ethnicity and ethnic conflict, and politics in various forms—presenting a comprehensive view of working-class life in the first half of the twentieth century.

This book has been published with the help of a grant from the Federation for the Humanities and Social Sciences, through the Awards to Scholarly Publications Program, using funds provided by the Social Sciences and Humanities Research Council of Canada.

Lunch-Bucket Lives is exhaustively researched and documented,… a thoroughly engaging history… will prove a model as much for historians engaged in labour history as it will for those conducting community or local history.

All readers of Lunch-Bucket Lives will be stimulated by the rich history the author paints.

A wonderful analysis of class and its pervasiveness in the lives of real people. It has broad implications for our understanding of the relationship between the lives and the exercise of power in Canada and elsewhere during the industrial area.

Craig Heron’s monumental book on working-class life in early twentieth century Hamilton, Ontario appears at first glance to be an old-fashioned social history – a community study. It is, in fact, a wonderful analysis of class and its pervasiveness in the lives of real people. It has broad implications for our understanding of the relationship between these lives and the exercise of power in Canada and elsewhere during the industrial era.

With an eloquence and liveliness unique among Canadian social historians, Heron integrates gender, class, ethnicity, race and ideology in an original and sophisticated narrative. The polished product of a half-century of devoted research and analysis, Lunch-Bucket Lives is, quite simply, a masterpiece.

Ian McKay calls [Lunch-Bucket Lives] a masterpiece and I can see why… This would be a wonderful textbook for undergraduate courses in social, labour or gender history, and that combination is a truly remarkable achievement… . Read this book: you will be richly rewarded.

Rodolfo Walsh, Argentinean writer killed by the dictatorship in 1976, said “bosses don’t want workers to know their history because workers that don’t know their history are always starting again.” Lunch-Bucket Lives is a complex, detailed and rich description of working class life that deserves to be read.

Craig Heron captures the essence of Hamilton like few other historians; he tells the story of the city’s working class during the fifty years prior to WWII with the critical eyes of an outsider and the heart of an intimate lover.

Craig Heron, one of Canada’s leading social historians, delivers in Lunch- Bucket Lives an outstanding histoire totale of Hamilton’s workers in the first four decades of the twentieth century

This is a great book, and I’m very glad I read it.

Expansive in reach, engaging in style, and filled with fascinating local details, Lunch-Bucket Lives is “total history” at its best

– Steve Penfold, professor, Department of History, University of Toronto, and author of The Donut: A Canadian History

[A ] book that looks as delicious as it reads, Craig Heron beautifully mixes narrative and image in telling the story of how Hamilton grew up over the past century. But he tells that story from the point of view of the many thousands of employees who used to work in that city’s manufacturing sector – a different approach, and very accessible.

Like a well-stocked lunch bucket, this beautifully crafted and illustrated book will both nourish and delight its readers. The research is prodigious, the analysis sophisticated, the prose accessible, even moving. The most inclusive history yet of a working-class community in Canada, Lunch Bucket Lives brings to life the city’s many diverse men, women, girls and boys.