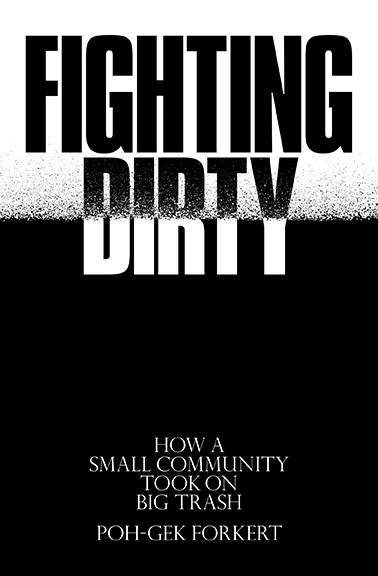 How a Small Community Took on Big Trash

Fighting Dirty tells the story of how one small group of farmers, small-town residents, and Indigenous people fought the world’s largest waste disposal company to stop them from expanding a local dumpsite into a massive landfill. As one of the experts brought in to assess the impact the toxic waste would have on the community, Poh-Gek Forkert was part of the adventures and misadventures of their decades-long fight.

“If an account of an environmental battle can be a page turner, this it it… .The author does a superb job of explaining the findings of the scientists involved and what was at stake in the process… . Fighting Dirty is a valuable handbook for citizen participation in direct democracy.”

Fighting Dirty is an inspiring tribute to a small rural community and a nearby First Nations community who combined forces to fight the world’s largest waste disposal company and its enablers in the Ministry of the Environment. Poh-Gek Forkert is a talented storyteller with a compelling David and Goliath story to tell.

– John Swaigen, counsel, Ecojustice; author of How to Fight for What’s Right: The Citizen’s Guide to Public Interest Law

Fighting Dirty tells the astonishing tale of one community’s battle against a deep-pocketed waste company. The Richmond Landfill leaks contaminants into groundwater that migrates onto neighbouring farmlands and into domestic wells, leaving families unable to drink their well water and unable to collect rainwater because of the guano from flocks of seagulls flying overhead. Forkert’s moving portrayal of the community’s courage and determination shows that citizens working together can respond to the incapacity of the very government ministries and agencies that they trust to protect them, and can mobilize allies to effectively fight environmental threats to their community. Best of all, in this case the good citizens win

In Fighting Dirty Poh-Gek Forkert recounts a story that is all too often told around the globe of a community facing grave environmental threats. Most of us pay very little attention to stories like these, assuming that it will never happen to us. Until it does. Then we are forced to realize that the institutions and agencies we assume will protect us can’t always be counted on. It is local champions with their passion to protect their families, homes, and communities who are the ones who really make a difference. This is a story of such champions and their decades-long fight to protect their community.

Fighting Dirty is a compelling page-turner and a tribute to all those people who have dedicated their lives to working together to protect their community against seemingly insurmountable big government and big corporate forces.

“If an account of an environmental battle can be a page turner, this it it… .The author does a superb job of explaining the findings of the scientists involved and what was at stake in the process… . Fighting Dirty is a valuable handbook for citizen participation in direct democracy.”

Fighting Dirty is a story that amplifies the voices, strength, and resilience of a rural and Indigenous community that fought to protect their environment from the contaminant risks of garbage. It’s also an important resource that challenges public health and municipal officials to ensure stronger evidence-based decisions. This is a must-read for other communities facing the same flawed and outdated regulatory processes that enable the Goliaths rather than the Davids to win.

Fighting Dirty is an inspiring read for all activists battling against the money and power of corporations. It shows that when a small group of determined, committed citizens don’t give up, leaders and unexpected opportunities will emerge. When the cause is just, good people can win.

There is nothing as divisive or as exhausting for a rural community as having to fight a corporate waste giant. The story of how a leaking local dump was purchased by the largest waste corporation in the world and then promoted as a mega-landfill for Ontario makes for chilling reading. Fighting Dirty is essential for anyone interested in issues of environmental justice, public process, and the power of grassroots citizen activism.

– Charlie Angus, author of Unlikely Radicals: The Story of the Adams Mine Dump War

Fighting Dirty is a primer for citizens’ groups battling against powerful corporations attempting to override sensible environmental planning. But more than that it tells the story of a community of rural agricultural and Indigenous peoples pulled together by a need to protect the land they love. It’s well worth the read.