The Greenpeace Message and the Media 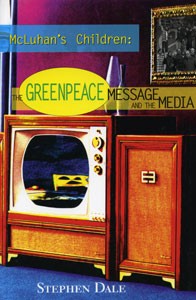 McLuhan’s Children is an inside look at Greenpeace’s rise to global prominence through its savvy use of mass media imagery. From the flamboyant, guerilla-theatre approach to the emergence of environmentalism as a dominant international issue.

McLuhan’s Children is the most sophisticated analysis I’ve read in years of the strange dance performed by the media and an important social movement. It is engaged scrutiny at its best - fair-minded and indepednent of party lines. I recommend it enthusiastically to anyone who cares about planetary health.

– Todd Gitlin, author of The Twilight of Common Dreams: Why America is Wracked by Culture Wars

An important book for all people trying to publicise their message and change the world, not just green it.