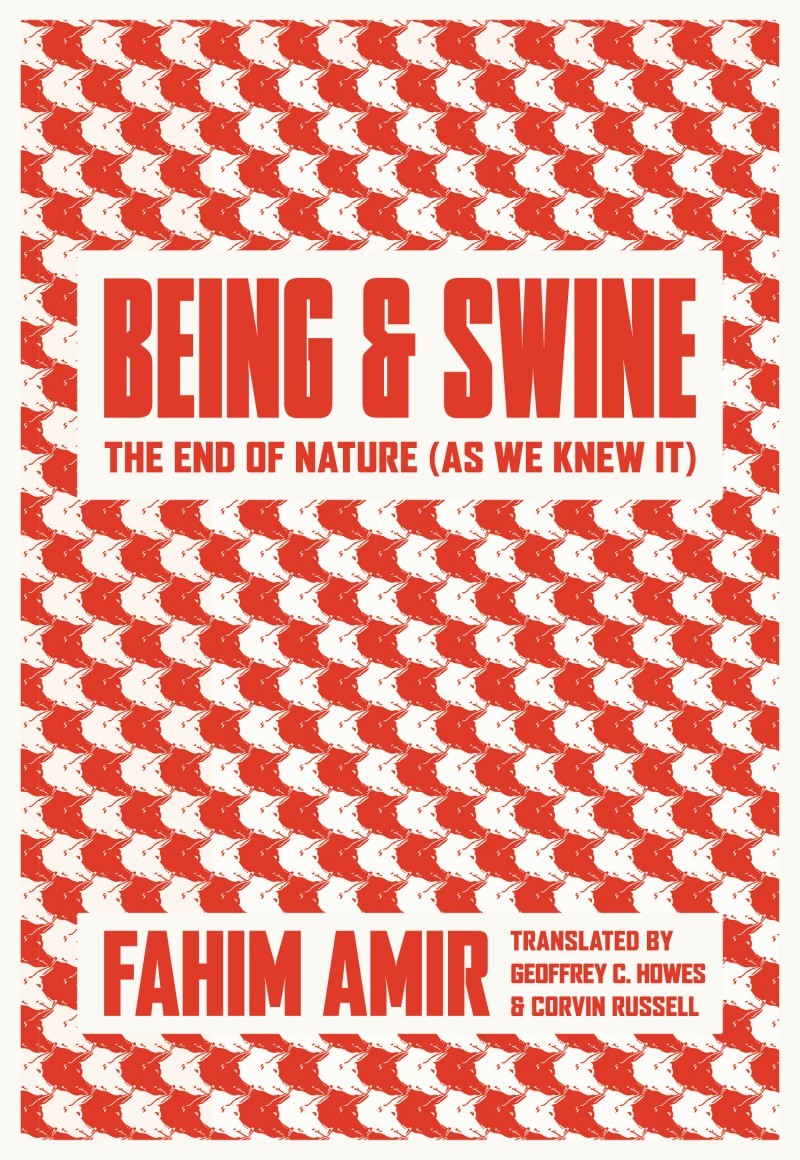 The End of Nature (As We Knew It)

Forget everything you think you know about nature. Fahim Amir’s award-winning book takes pure delight in posing unexpected questions: Are animals victims of human domination, or heroes of resistance? Is nature pristine and defenceless, or sentient and devious? Is being human really a prerequisite for being political?

In a world where birds on Viagra punch above their weight and termites hijack the heating systems of major cities, animals can be recast as vigilantes, agitators, and public enemies in their own right. Under Amir’s magic spell, pigs transform from slaughterhouse innocents into rioting revolutionaries, pigeons from urban pests into unruly militants, honeybees from virtuous fuzzballs into shameless centrefold models for eco-capitalism. As paws, claws, talons, and hooves seize the means of production, Being and Swine spirals higher and higher into a heady thesis that becomes more convincing by the minute.

At the heart of Amir’s writing is a deep optimism and bracingly fresh reading of Marxist, post-colonial, and feminist theory, building upon the radical scholarship of Donna J. Haraway and others. Contrarian, whip-smart, and wildly innovative, no other book will laugh at your convictions quite like this one.

“Amir challenges us—especially those of us on the left—to acknowledge the behaviour of animals as inherently political. Woven through the social, political, and economic theory are refreshing and often amusing vignettes of collaboration between animals and humans to resist state and colonial authority, as well as animals acting in the independent pursuit of pleasure, rebellion, and revenge.”

– Catharine Grant, author of The No-Nonsense Guide to Animal Rights

“Amir reveals a world where animals are seen with different eyes—not the consumer gaze, laced with pity, indifference, and violence, but as equal resisting agents in the struggle. A promise of a future where pigs, and those of fur, fin, feather, and feelers, resist the machine of capitalist oppression. Fanciful? No. This beautiful book is a sorely needed reminder that human speciesism has cancelled other animals from the resistance, when they resisted all along.”

“Free from typical boundaries of discipline or species, the freewheeling Being and Swine takes a novel jaunt through the history of thought and political philosophy: from Burke’s scaremongering against the ‘swinish multitude’ unleashed by democracy, to Engels’ famous struggle with the platypus, to the place of local pig-herding traditions in the development of the Frankfurt School. Being and Swine is filled with fertile polemics, witty detours, and swerves into burrows and sewers, pursuing unlikely bio-political insights that are sure to delight thinkers of any species.”

“Settle into Being and Swine and follow Fahim Amir through city parks, slaughterhouses, skyscrapers, military areas, supermarkets, construction sites, and many other places where humans and other-than-humans meet. From pigeon to platypus, from pigs to sparrows, honeybees to termites, engage with ecological and political imagination and know that nothing is untouched, nothing is passive. How is it that so many progressives miss the teeming, toiling, wily, freedom-seeking work of those political agents known as ‘animals’? In this compelling, vibrant, and fascinating book, Amir offers answer and remedy as he describes animal actors, their acts of resistance to human power, and the lessons of such resistance.”

– Carol J. Adams, author of The Sexual Politics of Meat

“Amir’s discussion of the challenges and possibilities of human-animal politics is not only thought-provoking, engaging, and wide-ranging, it is urgently needed. Social justice requires but also must move beyond Homo sapiens—and this has never been clearer.”

– Dr. Kendra Coulter, Chair of the Department of Labour Studies at Brock University, Fellow of the Oxford Centre for Animal Ethics, and author of Animals, Work, and the Promise of Interspecies Solidarity