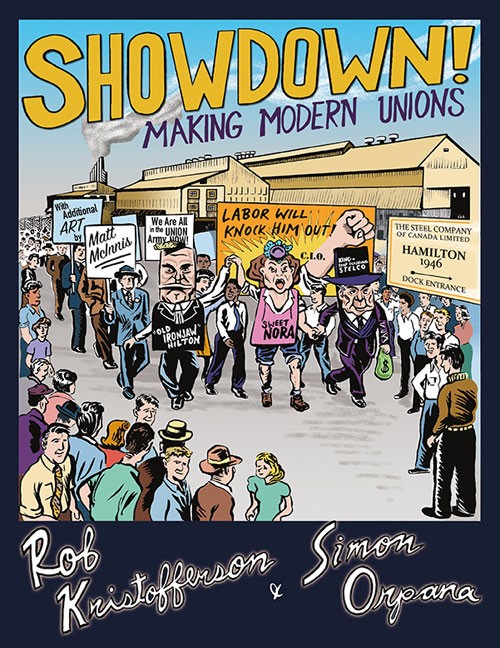 By Rob Kristofferson and Simon Orpana, Foreword by Paul Buhle

Seventy years ago, thousands of North American workers took a stand for a better life. And they won. In 1946, in the United States, over a million workers in the steel, meatpacking, and electrical industries put down their tools and walked out; and striking Canadian workers tied up provincial rubber and logging industries, the Southam newspaper chain, central Canadian ports, and the national steel industry. Workers in Hamilton, Ontario hoisted picket signs at Westinghouse, Firestone, Stelco, and The Hamilton Spectator, and with the support of rallying friends and neighbours, turned the strikes into a community-wide struggle for decency, respect, and security.

Based on interviews and other archival materials, this graphic history illustrates how Hamilton workers translated their experience of work and organizing in the 1930s and early 1940s into a new kind of unionism and a new North American society in the decades following World War II.

I lived through some of the events in this book. Not directly. But in stories told by my father who worked at International Harvester in the 1940s or our neighbours who worked at Stelco and Westinghouse. Or, in looking at the faces of the women and men who walked through my North End neighbourhood on their way to work. Or, via my mother who was receiving benefits won by my father’s local union almost 30 years after he died. For me, those faces and those stories from my history breathed life into the events highlighted and analyzed in Showdown! The great value of Showdown!, I believe, is that it will do exactly the same for its readers. Through a highly accessible and informed narrative, and absolutely terrific and evocative graphics, the authors have captured these times, these events. Most importantly, they have captured these people making history – a history that in our times is worth telling and well worth remembering.

Simon Orpana’s powerful artwork transports the reader to a time and place—1940s Hamilton—in a way so evocative, you can practically smell the bologna sandwiches. Showdown! as a whole is an exhilarating and inspiring story, a reminder to us in a time of hubris, of the battles that can be won when people stand together.

This graphic history focuses on how Hamilton workers’ translated their experience of work and attempts to organize in the 1930s and 1940s into a new kind of unionism and a new society in the decades following World War II—a pattern that played out in similar ways in communities across Canada and the United States.

Showdown! Weaves together incredible research, story-telling, and illustrations to create this important contribution to the growing field of labour and working-class graphic histories. A must-read, particularly for students, workers, union members, and those interested in historical comics.

A gripping tale of confrontation and struggle against shocking exploitation and oppression. The brilliant graphics and the lively, engaging text, full of the workers’ own voices, provide a compelling narrative of one of the most important events in mid-twentieth- century Canadian labour history.

Showdown! is a fast-paced graphic narrative of one of Canada’s most important labour movements – the struggle for unions and fair working conditions in Hamilton, Ontario, culminating in the STELCO strike of 1946. Filled with detailed drawings of everyday life in the factory, on the picket line, and in the community, this is accessible history with suspense and action we all need to hear about. It should be required reading throughout Canada.

Meticulous, gripping, and beautifully designed, Kristofferson and Orpana’s work shows how the steely determination of the Hamilton workers transformed our society.

This book is a gem. Kristofferson and Orpana uncover the courage and solidarity of the everyday working people who took on a steel giant and won. Told through their voices, Showdown! jolts labour history to life, inspiring a new generation of workers.

One of the perils often shared by academic writing and writing on leftist politics is a dryness that rivals the finest martini in the world. What’s good for the imbiber of cocktails is not so for the reader of these tracts. But–spoiler alert–Showdown!, part of a PhD dissertation on labour studies, is an exciting and animated read.

What could be more important than to learn more about the struggles for social justice that Canadians have undertaken in the past? At a time when the social and political import of unions continues to be threatened, both in Canada and around the world, Showdown! reminds us that ordinary citizens have worked together in difficult circumstances to get what is rightfully theirs. This graphic history of Hamilton’s 1946 strike against the steel industry will energize anyone engaged in the continuing fight for justice and fairness, whether in the workplace or in society at large.

Showdown! is a fast-paced graphic narrative of one of Canada’s most important labour movements – the struggle for unions and fair working conditions in Hamilton, Ontario, culminating in the STELCO strike of 1946. Filled with detailed drawings of everyday life in the factory, on the picket line, and in the community, this is accessible history with suspense and action we all need to hear about. It should be required reading throughout Canada.