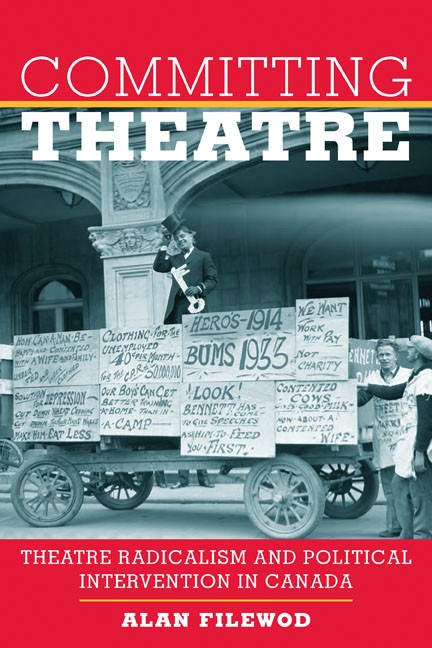 Committing Theatre offers the first full-length historical study of political intervention theatre and theatrical spectatorship in English Canada. Building on twenty years of research and engagement in the field, this book’s historical narrative frames close-up examples of how theatre artists have intervened in and engaged with political struggle from the mid-19th century to the present. Lumber-camp mock trials, Mayday parades and street protests, the Workers Theatre Movement, agitprop theatre, the counter-culture theatre of the 1960s and 1970s, and more recent anarchist theatre collectives all played a role in a vibrant and unique radical theatre culture that went largely unnoticed, unrecorded, and undocumented by the professional theatre establishment.

Committing Theatre is a masterwork, an adroit synthesis of three decades of research, teaching, editing, organizational leadership and artistic practice. It is the most comprehensive survey of political theatre in the Canadian multiculture to date, but also a rigorous critique of the very terms “political” and “theatre” and their role in scholarship, the Canadian arts economy, and Canadian culture more generally.

In Filewod’s hands, Canadian theatre history becomes a metaphor for the development of the modern Canadian nation-state and a transnational culture pressing ever more insistently against our borders.

[Committing Theatre] is an absolutely essential book in its field–fuelled by a passion for theatre that makes a difference–and will permanently change the way in which theatre in Canada is understood.

Committing Theatre challenges traditional paradigms and should be required reading in any study of Canadian theatre.

This sophisticated yet accessible treatment combines personal reflection with scholarly rigour, and covers an impressive array of performance events, styles and venues.