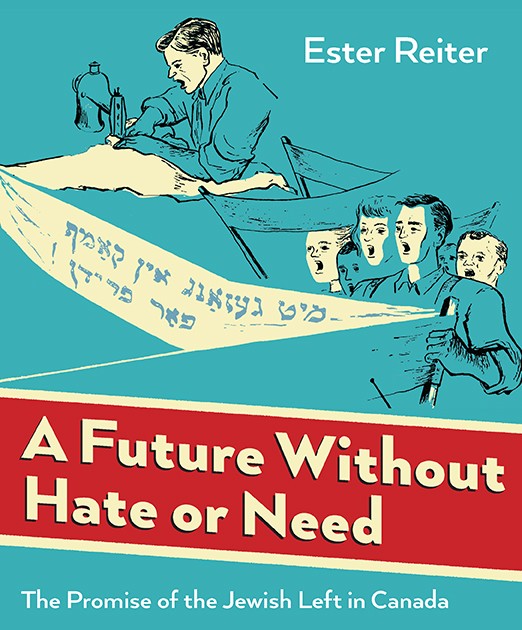 A Future Without Hate or Need

The Promise of the Jewish Left in Canada

Driven from their homes in Russia, Poland, and Romania by pogroms and poverty, many Jews who came to Canada in the wave of immigration after the 1905 Russian revolution were committed radicals. A Future Without Hate or Need brings to life the rich and multi-layered lives of a dissident political community, their shared experiences and community-building cultural projects, as they attempted to weave together their ethnic particularity—their identity as Jews—with their internationalist class politics.

Written with the right mix of respect, compassion, and critical reflection, this heartfelt history of the fascinating cultural world of the mostly Yiddish-speaking Jewish left in Canada and the talented and committed women, men, and children who lived it, brims with stories that will sadden, anger, inspire, enlighten and, above all, stay with you. Through narratives relayed in oral interviews, journals, poems, political and folk songs, plays, women’s readings, summer-camp performances, and more, we glimpse the heart and soul of an extraordinary cultural movement for social justice and social change.

Reiter’s invaluable contribution is in identifying the dynamics of the making of a left Yiddish culture. … This is an exemplary history of a people engaged in the making of a new Jewish ethnic identity.

An interesting and important read.

Skillfully utilizing a wealth of first-hand material from interviews and memoirs (as well as a wide range of documents), Reiter provides an insider’s account of the courageous struggles of those who strove to balance a strong commitment to a unique vision of Jewish identity with a strong commitment to working-class internationalism. In so doing, she provides a dynamic view of the ways in which their rich cultural life and their political activism deeply intertwined, in the midst of world-shattering events such as the Great Depression, the Spanish Civil War, the rise of Nazism, the Hitler-Stalin Pact, the Second World War, the Holocaust, the Cold War, and the Stalin Revelations.

– Ruth A. Frager, McMaster University, author of Sweatshop Strife: Class, Ethnicity, and Gender in the Jewish Labour Movement of Toronto, 1900-1939

In her tenderly rendered recovery of the history of Canada’s secular Jewish left, Ester Reiter excavates the contradictions and complexities that shaped Jewish identities and underpinned the Jewish left’s rich cultural life. Her inspiring account of the women, men, and children in the secular Jewish left immerses us in the radical vision of a “more beautiful, better world” that informed the activities, organizations, and culture of these twentieth-century Jewish radicals. Poetry, music, and theatre went hand in hand with politics in a movement that demonstrably challenges the bifurcated view of left/right divisions and reductive assessments of left movements. This book’s nuanced perspective on the Jewish ethnic left and its many contributions to North American society offers valuable insights on our collective past and makes an important contribution to the new scholarship on left history

A Future Without Hate or Need offers a deep examination of the culture and personalities of the Toronto Jewish radical left during its efflorescence. The Yiddish material, much of it drawn from Der Kamf, is superb. Passages translated from the original Yiddish are rarely-used sources that add strongly to Reiter’s argument that the principal focus of this movement was social/cultural rather than strictly ideological/political. This book is written with warm sympathy and penetrating insight.

This is a wonderfully dense, rich, descriptive and analytical volume, certain to be unique in the appreciation and understanding of the Canadian Left… . The words of the reviewer cannot do justice to the pleasure of looking through these pages again and again.

An interesting and important read.

A generous portrait of people whose own struggles were so often superseded by a vision of the common good.

Warm-hearted, intimate, sometimes critical and always courageous, A Future Without Hate or Need offers twentieth-century Canadians a fresh understanding of the stalwart men, women, and children who championed and lived their own version of sotsyalizm (socialism). In summer camps and orchestras, city councils and schools, left-wing parties and cultural centres, Jewish leftists created a remarkably diverse and successful movement – one that, through personal memoirs, skilful archival digging, and beautiful photographs and cartoons, Ester Reiter lovingly recreates for us—in all its complicated glory.

Ester Reiter offers us something utterly unique in Jewish and Canadian history: an intimate portrait, wonderfully illustrated with vintage photos, of the community of Jewish progressives: building institutions, promoting education and cooperation, and living their lives within wider society, seeking to encourage a more egalitarian world.