Thursday, September 30th, is the inaugural National Day for Truth and Reconciliation in Canada, a holiday created by the federal government earlier this year.

While the day is not designated as a provincial public holiday in Ontario and several other provinces, meaning it is not a mandated day off work, Between the Lines will close on the 30th, so that staff can take the day off to reflect on our role in undoing the ongoing harms of colonialism and to act in solidarity with Indigenous Peoples.

While we expect that most government-run events on the day will focus on the past, we want to remember that the process of colonization—at its core a process of dispossession—continues today. It did not start or stop with the horrific residential schools. Those schools were part of a centuries-long process to destroy Indigenous cultures and clear the land for exploitation by settler capitalists.

A day for Truth and Reconciliation is a good gesture, but the work of decolonization needs to happen all year, every year. Decolonization is not a holiday.

Today, land theft continues through resource extraction and real estate grabs. Colonialism continues with the theft of Indigenous children through the child welfare system, through forced sterilizations, and through the ongoing genocide of Missing and Murdered Indigenous Women, Girls and Two Spirit People (MMIW2S).

While settler governments apologize for the brutal past one moment, they continue attacking Indigenous Peoples the next.

But if we look around, there is so much inspiring decolonizing work being done, led by Indigenous Peoples.

For one, Indigenous media-makers, including writers, are finally getting the recognition they deserve, telling stories that have long been ignored in dominant settler culture. There is no longer any excuse to say you don't know of Indigenous media-makers. Listen to their music, read their books, watch their documentaries, subscribe to their podcasts, and buy their art.

We also draw immense inspiration from Indigenous Peoples defending their land. While the colonial state, at the behest of profit-seeking companies and investors, tries to clear Indigenous Peoples from their land, people in those communities push back. For settlers, it is essential in this process of decolonization (or reconciliation, or whatever term you want to use) to be in solidarity with Indigenous Peoples in these struggles.

Support the Mi’kmaq fishers as they are persecuted by the Department of Fisheries and Oceans. Support the Tiny House Warriors as the RCMP criminalizes them for living in the path of the TMX pipeline. Support those at Fairy Creek blocking old-growth logging. Support the Wet'suwet'en who just evicted the CGL pipeline company from their lands and are now facing violence from the RCMP. Support the Algonquins who are protecting their territory and the moose from over-hunting. Support the Cree who are trying to stop the pillaging of their lands in northern Saskatchewan for peat moss. Support the Haudenosaunee defending their land from real estate development at 1492 Land Back Lane near Caledonia, ON. Support Asubpeeschoseewagong (Grassy Narrows) in their decades-long fight to have mercury contamination in their river cleaned up, and against logging.

We encourage you to find inspiration for your own decolonizing efforts from Indigenous writers. Here, we suggest two of our most popular Indigenous history and politics books, which give a solid foundation to understanding Canada's long, ongoing process of colonial dispossession, and what fighting back can look like.

Between the Lines will donate the proceeds from all sales on our web store on September 30 to 1492 Land Back Lane. 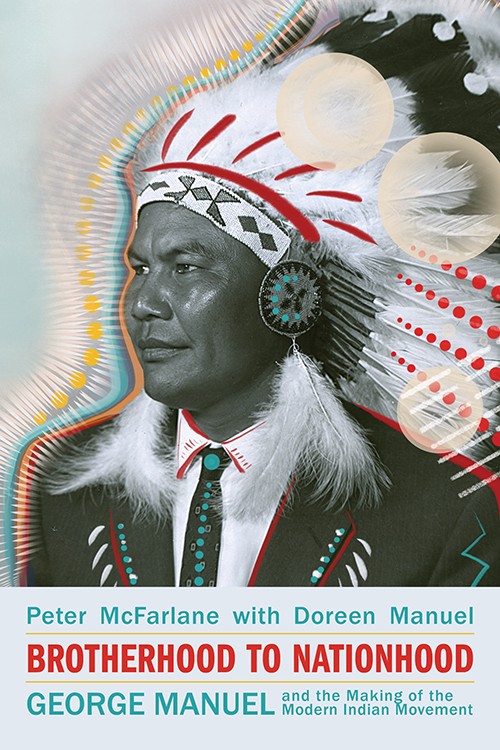 George Manuel and the Making of the Modern Indian Movement

By Peter McFarlane and Doreen Manuel