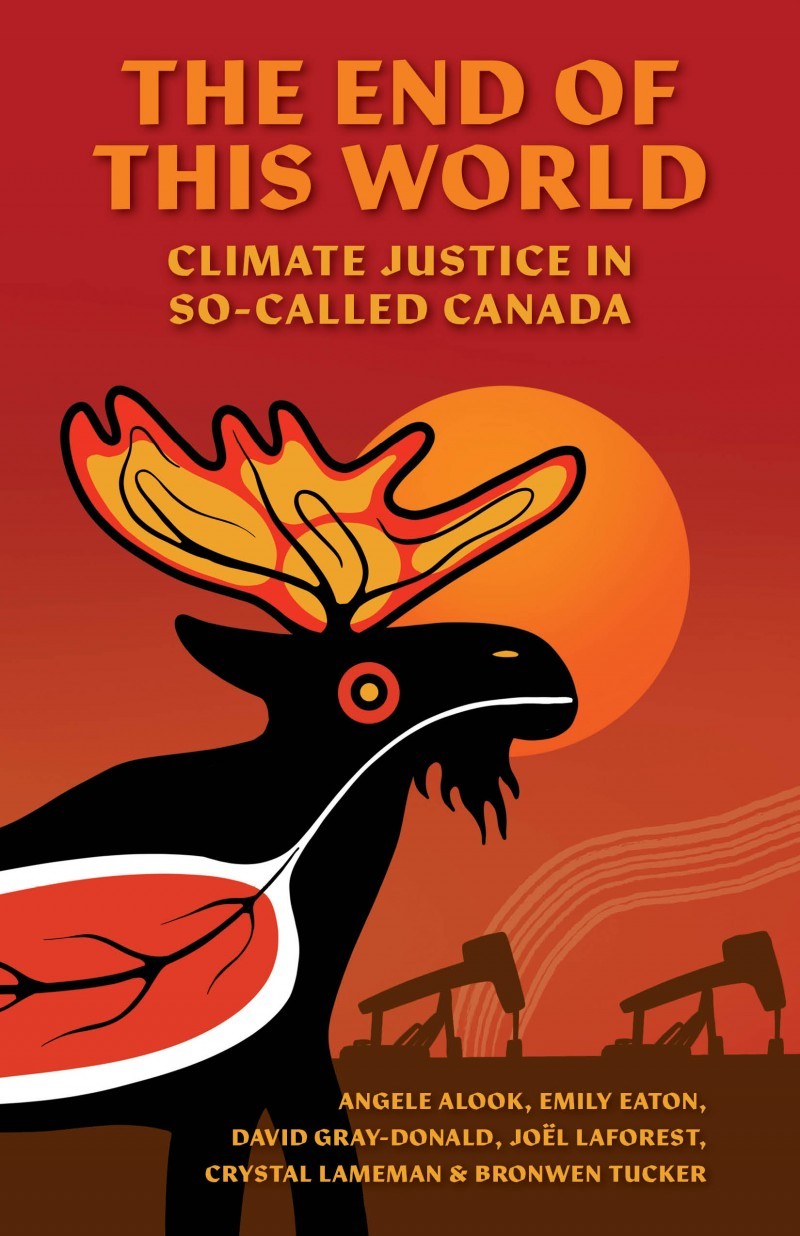 The End of This World

The climate crisis is here, and the end of this world—a world built on land theft, resource extraction, and colonial genocide—is on the horizon. In this compelling roadmap to a livable future, Indigenous sovereignty and climate justice go hand in hand.

Drawing on their work in Indigenous activism, the labour movement, youth climate campaigns, community-engaged scholarship, and independent journalism, the six authors challenge toothless proposals and false solutions to show that a just transition from fossil fuels cannot succeed without the dismantling of settler capitalism in Canada. Together, they envision a near future where oil and gas stay in the ground; where a caring economy provides social supports for all; where wealth is redistributed from the bloated billionaire class; and where stolen land is rightfully reclaimed under the jurisdiction and sovereignty of Indigenous peoples.

Packed with clear-eyed analysis of both short- and long-term strategies for radical social change, The End of This World promises that the next world is within reach and worth fighting for.

“The End of This World gifts readers with a mapping of a communal future grounded in Indigneous concepts of caring, relationship, solidarity, and a sharp analysis of the present. It is a gathering space, an experiment, and an invitation towards building formations of life outside of the cage of colonialism and capitalism. Engaging, timely, and crucial, I am so grateful this book exists, and for the futures it will inspire.”

“This book is a major and much-needed contribution to the climate conversation in Canada. The collective behind it embodies the very politics necessary to win a just transition that is worthy of the name: Indigenous-led, internationalist, rooted in solidarity, and crackling with moral clarity. The End of This World advances a holistic, radically reasonable vision of a future worth fighting for—and the authors have tallied the receipts for that glorious moment when the perpetrators of planetary arson get served the bill.”

“As Idle No More, Indigenous peoples, and their allies have repeatedly stated, ‘Indigenous sovereignty is climate action.’ This book offers a plan to move from our current death economy to a healthier world that centres and validates Indigenous knowledges. Integrating personal narratives, meticulous research, and practical lists, it calls for social movements and all levels of government to work together to address the climate crisis. All that is left is for us to just transition!”

“The End of This World makes clear that, in addition to being a crisis of political, economic, and ecological dimensions, Global North-spurred climate change also represents a relational crisis, one in which the bonds between communities—and between humans and other living organisms, including land—have been forcefully and intentionally severed. The authors urge us to refashion these bonds, reminding us that our only chance at avoiding barbarism lies in principled global anti-capitalist and anti-racist solidarity. The End of This World highlights the obligation of residents of so-called Canada to oppose, obstruct, and ultimately eliminate extractive industries based here. It also moves us to provide comprehensive reparations for the Global North’s centuries long colonial exploitation, subjugation, and brutal oppression of Indigenous peoples and the Global South.”

“Environmental apartheid is over. Indigenous land protectors stand at the forefront confronting unbridled destruction. This is not an Indigenous issue, this is an environmental issue, which makes it every human being’s problem. The End of This World presents an alternative to the scorched earth reality of colonial capitalism: a new economy based upon ecological restoration and the revitalization of human spiritual integrity.”