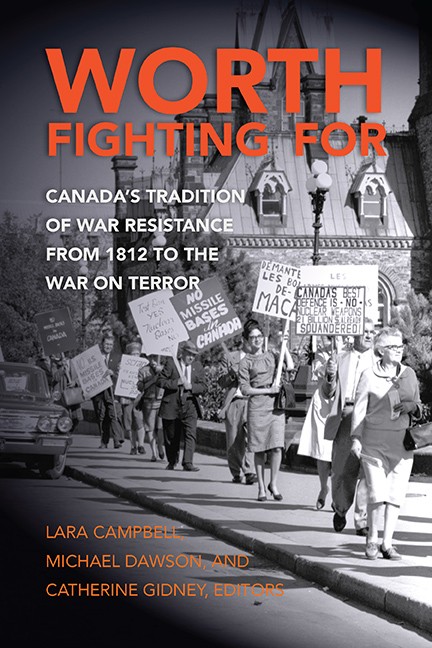 Historians, veterans, museums, and public education campaigns have all documented and commemorated the experience of Canadians in times of war. But Canada also has a long, rich, and important historical tradition of resistance to both war and militarization. This collection brings together the work of sixteen scholars on the history of war resistance. Together they explore resistance to specific wars (including the South African War, the First and Second World Wars, and Vietnam), the ideology and nature of resistance (national, ethical, political, spiritual), and organized activism against militarization (such as cadet training, the Cold War, and nuclear arms).

As the federal government continues to support the commemoration and celebration of Canada’s participation in past wars, this collection offers a timely response that explores the complexity of Canada’s position in times of war and the role of social movements in challenging the militarization of Canadian society.

Read this wonderful collection and be prepared for a totally new kind of Canadian war story – the anti-war story. Worth Fighting For uncovers, examines and celebrates an essential but long neglected stream in Canadian war history. It’s a story of resistance and vision, and it’s been helping to shape Canada’s character since well before confederation.

Feeling some, ah, resistance about being part of Canada’s latest little war in some distant desert? Worth Fighting For will reassure you that Canadians have been resisting war and war fever for centuries. Prominent historians and younger scholars here explore everyone from Christian pacifists in the War of 1812 to today’s classroom school teachers seeking to interrogate war. Canada was forged by war resistance as well as by war.

Whether you are a lifelong peace activist or an enthusiast for a robust and muscular Canadian military, Worth Fighting For is worth your time… . The “warrior nation” debates are likely to continue in the foreseeable future, and the authors and editors of this fascinating book have done us all a favour by providing intelligent and well-written briefing papers on its historical background.

The edited collection Worth Fighting For, is an important addition to historical literature about Canada. The nineteen different contributors provide insight into the politics, activism, institutions, social movements, and individuals that make up a long tradition of Canadian war resistance.

The contributors to the ironically titled Worth Fighting For have performed an admirable public service. They’ve provided an insightful alternative to today’s patriotically correct effort to shift Canadian self-understanding in a warlike direction. Here is a fascinating collection of incisive arguments showing that Canada has a long and proud tradition of fighting war, not just wars.

In the midst of contemporary debates about Canada’s legacy as a ‘warrior’ nation or a “peacekeeping” nation, this welcome collection of wide-ranging case studies that span 200 years provides sound evidence of individuals and groups that rejected militarism as a national ethos or a solution to global conflict. Finally, alongside the numerous books on Canada “at war”, we have an outstanding volume that chronicles Canadians who actively “resisted war”. The original perspectives here will not only enrich the current debate, but will positively shift our narrative of Canadian history itself.

Worth Fighting For should be required movement reading in a time when our government (and perhaps those in waiting, too) feel it’s okay to toss aside the narratives and experiences and lives lived of those who disagree with their party lines.

At a time when government is promoting our traditions of military valour, this compilation of essays is a useful reminder that, historically, the Canadian reaction to war has been far more complicated.