American Triumphalism in an Age of Terror 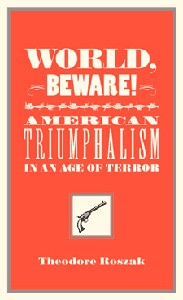 RENOWNED SOCIAL CRITIC Theodore Roszak articulates a biting critique of the American political and cultural scene dating back to the conservative backlash of the Reagan presidency. World, Beware! analyzes three major forces that have coalesced to produce the triumphalist policies that now dominate U.S. politics: the corporate elite, the neoconservative intelligentsia, and the fundamentalist churches. Roszak calls for a new “global constituency” that would rein in the superpower’s excesses, and promotes a dialogue on the future of industrialism. Fuel to resist the neoconservative assault.

Part of the Provocations series.

America has proven unable to alter its own destructive course. The rest of the world must play a role in reining in the superpower’s excesses. Roszak shows us why and how.

Theodore Roszak is one of the nation’s boldest and most eloquent social critics.This book is an alarm bell intended to awaken us to the long-term dangers of our present course. We must all listen to Roszak’s message if we are to survive as a decent society at one with the world.

– Howard Zinn, author of A People’s History of the United States