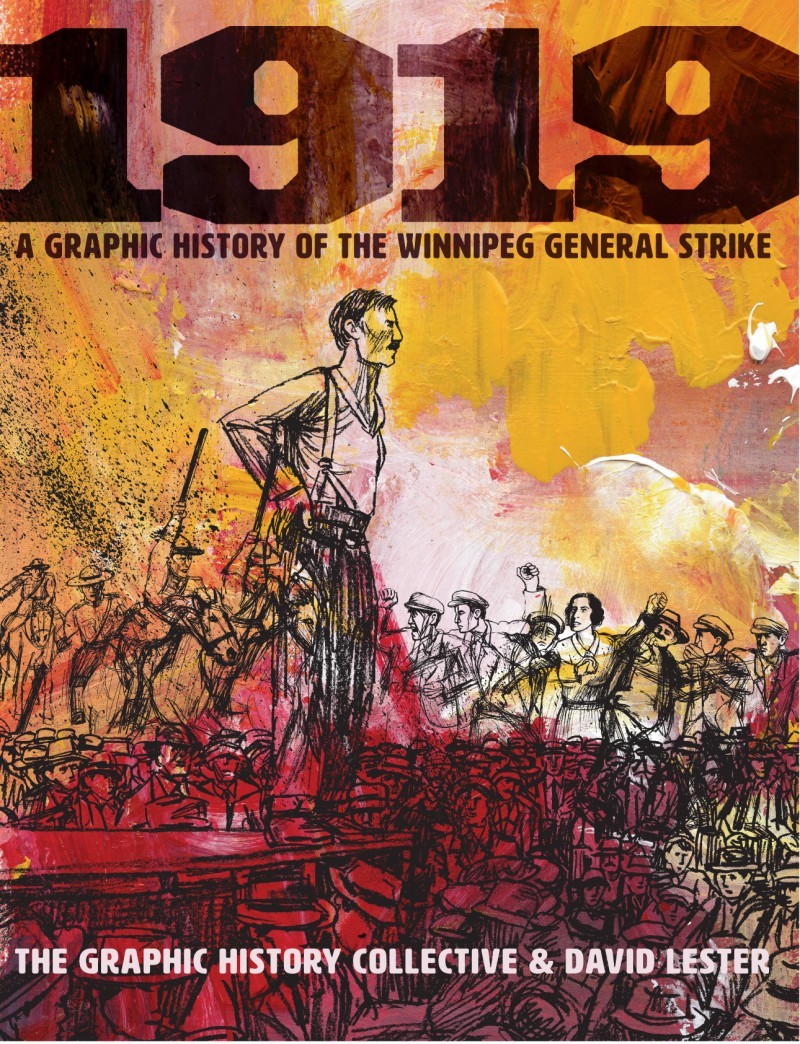 A Graphic History of the Winnipeg General Strike

In May and June 1919, more than 30,000 workers walked off the job in Winnipeg, Manitoba. They struck for a variety of reasons—higher wages, collective bargaining rights, and more power for working people. The strikers made national and international headlines, and they inspired workers to mount sympathy strikes in many other Canadian cities. Although the strike lasted for six weeks, it ultimately ended in defeat. The strike was violently crushed by police, in collusion with state officials and Winnipeg’s business elites.

One hundred years later, the Winnipeg General Strike remains one of the most significant events in Canadian history. This comic book revisits the strike to introduce new generations to its many lessons, including the power of class struggle and solidarity and the brutal tactics that governments and bosses use to crush workers’ movements. The Winnipeg General Strike is a stark reminder that the working class and the employing class have nothing in common, and the state is not afraid to bloody its hands to protect the interests of capital. In response, working people must rely on each other and work together to create a new, more just world in the shell of the old.

This brilliant account of the 1919 Winnipeg General Strike is as sharply analytic and richly researched as it is vividly and movingly illustrated. 1919 captures the greatest event in Canadian labour history better than anything else I have ever seen.

With the centenary of the Winnipeg General Strike upon us, 1919 could not be a more timely or important book. This is Canadian labour history at its engaging best.

A concise, powerful, and beautifully illustrated account of the Winnipeg General Strike that confirms its contemporary relevance for workers demanding their rights and dignity today.

1919 captures the raw intensity of class struggle during the Winnipeg General Strike and conveys important lessons about organizing and the power of solidarity for new generations.

1919 illustrates not only the brazen spirit of Winnipeg strikers, but the strategies they used to coordinate their mass defiance of poverty, war, and the colluding interests of capital and the state. This is essential reading for young workers and organizers today.

This is one of the most important books of our time for educating people about the very important history of our city and the labour movement.

This is a dynamic and engaging comic book history of the Winnipeg General Strike that keeps the memory of an important class conflict alive.

– Gord Hill, Kwakwaka’wakw author and illustrator of The 500 Years of Resistance Comic Book

1919 captures the intensity and vibrancy of the Winnipeg General Strike. This book is a must-read for history buffs, comics fans, and everyone seeking a more just world.

1919 is both inspired and inspiring; it is essential reading for our times!

– Paul Buhle, editor of Wobblies! and co-author of A People’s History of American Empire

Imaginative and deeply moving, 1919 is a triumph. It presents the background and multifaceted story of the Winnipeg General Strike clearly by drawing fully on historical research to pay attention to class, gender, race, and politics. This book is the perfect introduction to the events of 1919 for a range of audiences from social studies classes to universities to unions.

1919 uses radical art and history to remind us, in Winnipeg as elsewhere, that the status quo is not a foregone conclusion as long as we choose to organize and actively resist it.

Read this book. Share it. Learn from the truth it shares and think about the questions it raises. And then ask some of your own, like: ‘When do we do it again?’

This is a rigorous, thoroughly engaging, and dynamic recounting of the Winnipeg General Strike, one of the most dramatic episodes of labour unity and activism in Canadian history. The illustrations, grounded in key visual sources, underscore the event’s high stakes and emotion while at the same time honouring and commemorating its supporters. This is a timely and important work.

An engaging and easy way to learn about Canadian labour history that reflects today’s ongoing struggle for fair wages and working conditions.

They live in our imaginations still: those remarkable days when workers in one of Canada’s largest cities seized power and dared to dream of an egalitarian, post-capitalist society. 1919 is a stirring, vivid centennial portrayal of the Winnipeg General Strike that makes it come alive again for a new generation.

1919 is fantastic! The lessons of the Winnipeg General Strike, an event at once local, national, and international, come alive in these pages and highlight how women workers defied gender and class expectations to join working-class men in seeking a fairer economic, political, and social system.

– Linda Kealey, author of Enlisting Women for the Cause

This is a wonderful project that will help activists today understand the character of class struggle in Winnipeg and beyond.

When war and nationalism bolstered the rich and the powerful, it also brought the working class together. It is inspiring to remember that the struggles of all working-class people intersect with the fight against oppression of Indigenous peoples, women, and people of colour. 1919 is a timely reminder that we are allies in struggle and that structural change happens when we fight together, united.

These graphic histories were enjoyable reads and I look forward to see what the Graphic History Collective is up to next.

1919: A Graphic History of the Winnipeg General Strike, bolstered by historical analysis in its foreword, is a useful and clear account of the strike with attention paid to holding some of the disparate threads of history in dialogue with each other. Easy and fun to read, with an urgent energy, this book will certainly familiarize and interest its audience with this important history and in doing so can further the vital conversation around the character of class struggle in settler colonial Canada.

[a] compelling chronicle of the 1919 Winnipeg General Strike.