Rebranding Canada in an Age of Anxiety 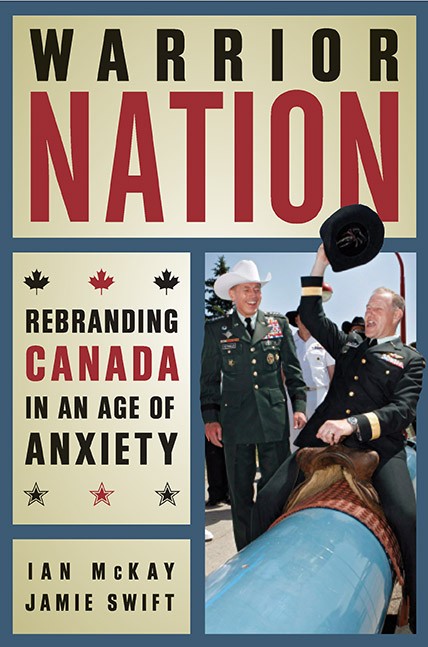 The tales cast a vivid light on a story that is crucial to Canadas future; yet they are also compelling history. Swashbuckling marauder William Stairs, the Royal Military College graduate who helped make the Congo safe for European pillage. Vimy Ridge veteran and Second World War general Tommy Burns, leader of the UNs first big peacekeeping operation, a soldier who would come to call imperialism the monster of the age. Governor General John Buchan, a concentration camp developer and race theorist who is exalted in the Harper governments new Citizenship Guide. And that uniquely Canadian paradox, Lester Pearson. Warrior Nation is an essential read for those concerned by the relentless effort to conscript Canadian history.

Warrior Nation tells the story, the whole story. So if you are a peaceable person either by nature or intent, you would do well to listen to Jamie Swift and Ian McKay…before the last trumpet sounds.

With our federal government determined to glorify war and eradicate our enduring attachment to Canada as a promoter of peace, this engaging and highly readable book alerts us to what’s at stake: the very soul of our nation.

McKay and Swift offer a fresh and lively account of a deep ambivalence at the core of Canada’s performance on the world stage, a handmaiden to empires in the costume of a peacemaker. Here is essential reading.

Warrior Nation is intended to stir controversy, and it will. With compelling prose and abundant evidence…Ian McKay and Jamie Swift have written an important work of engaged and impassioned history, and it deserves a wide readership.

– A. B. McKillop, Chancellor’s Professor and former chair of the history department, Carleton University

This excellent and timely book offers a much needed corrective to the new warrior scholarship that is becoming so pervasive. It should be on the reading list of anyone who is interested in Canadian politics, international relations, and foreign policy.

A welcome remedy to the “Support Our Troops” yellow ribbon epidemic.