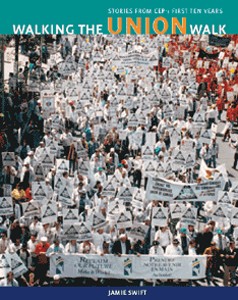 Stories From the Communications, Energy, and Paperworkers Union

Hi-tech tactics during a strike at a dockside factory in Montreal. A workplace cancer tragedy in Sarnia, Ontario. Immigrant workers sticking with their union at the chocolate factory. A struggle for pay equity in the courts and on the streets. A campaign to create jobs by cutting hours of work in B.C. An organizing drive 350 kilometres out into the frigid Atlantic. These are some of the fascinating stories told by Jamie Swift in his chronicle of the first ten eventful years of one of the most dynamic labour unions in North America.

A strength of the book is its national scope, and the range of jobs portrayed, drawing on stories from every region of the country.

“We had a little war there,” laughed Alain. “One of the first internet strikes. We’d just entered a new century and with it a new level of struggle using new technology.”

“Unions are always accused of looking out for ourselves,” said Mike. At 47, he was one of the youngest pipefitters at the mill. “We’re trying to reduce the work week to keep people employed, and not just our own members.”

Throughout, the book demonstrates the commitment and solidarity of union members, regardless of industry or employer. It also displays their organizational vitality and imagination. There’s evidence of some non-traditional forms of resistance, including workers’ websites, union cookbooks, a cross-country ambulance tour, literacy projects, and theatre groups.