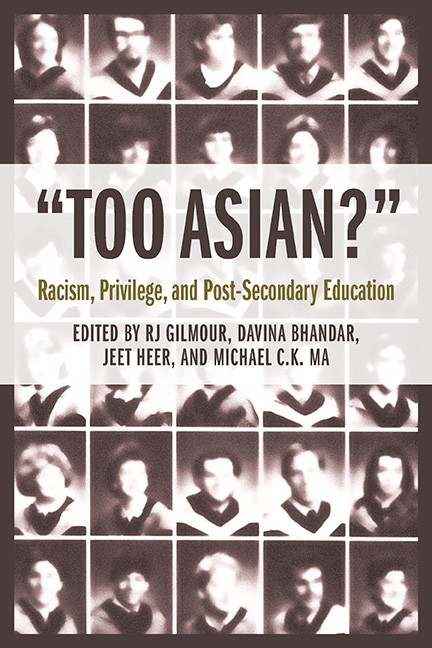 The now notorious Maclean’s article “Too Asian?” from the magazine’s 2010 campus issue has sparked a national furor about race in Canadian higher education. Since the founding of the federal policy of multiculturalism, Canadians have prided themselves on their ability to integrate diversity into a broader multicultural environment, but the often heated discussions about race point to fissures in this national project. This collection uses the controversy about the Maclean’s article as a flashpoint to interrogate issues about race and representation on Canadian campuses and what it means for students and learning across the country.

An intelligent, scholarly, and sanity-restoring response to Maclean’s Magazine’s ‘Too Asian?’–one of the shabbiest and laziest pieces in the history of Canadian magazine journalism.

‘Too Asian?’ is an important commentary on the ways that power and ideology are inextricably bound to the politics of race and identity within and beyond Canadian institutes of post-secondary education. This collection highlights some of the challenges that we must continually work to overcome, and applauds the collective work that has already begun.

This excellent book describes the complex force fields of racialization in higher education in compelling ways.

This book is fundamental reading about the perception of race, identity, and belonging in Canada. It astutely connects Maclean’s ‘Too Asian?’ article to the broader historical context of racism and the place of visible minorities in our higher education institutions. It invites readers to probe into our past to understand and unlearn the current patterns of discrimination and exclusion.

Maclean’s Magazine’s ‘Too Asian?’ article provided the stimulus for a powerful series of articles written by young scholars that focus on the dynamics of race, racialization, and Indigeneity in post-secondary institutions. [Going] far beyond the ‘Too Asian?’ of the title…this highly stimulating and informative book is a must read for all students and professionals who want to broaden their understanding of critical race analysis.

Apologists of institutional racism and discrimination prevent Canada from reaping the benefits that all people bring to this country. Congratulations to the editors and writers of this important book for dealing with the complex nature of racism, power, and privilege in a dispassionate manner. The inability of people to learn from the past makes it mandatory for us to engage in relentless dialogue coupled with political activism.

For courses that deal with multiculturalism, race and ethnic relations, equity studies or any of the applied sociology courses that involve immigration, assimilation, prejudice and discrimination, this collage meets and exceeds expectations.

‘Too Asian?’: Racism, Privilege, and Post-Secondary Education’ boldly advances the dialogue around the ways race functions in Canada; and, as it should, it regards this conversation as a prerequisite for building a more just and civilized society.