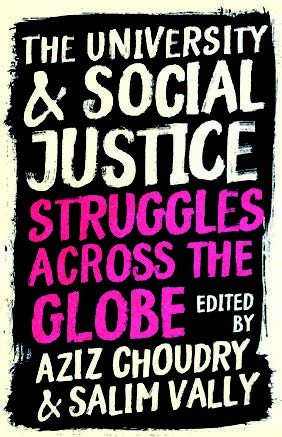 The University and Social Justice

Struggles across the Globe

Higher education has long been contested terrain. From student movements to staff unions, the fight for accessible, critical, and quality public education has turned university campuses globally into sites of struggle. Whether calling for the decommodification or the decolonization of education, many of these struggles have attempted to draw on (and, in turn, resonate with) longer histories of popular resistance, broader social movements, and radical visions of a fairer world.

In this critical collection, Aziz Choudry, Salim Vally, and a host of international contributors bring grounded, analytical accounts of diverse struggles relating to higher education into conversation with each other. Featuring contributions written by students and staff members on the frontline of struggles from 12 different countries, including Canada, Chile, France, India, Mexico, Nigeria, Occupied Palestine, the Philippines, South Africa, Turkey, the UK, and the US, the book asks what can be learned from these movements’ strategies, demands, and visions.

“Editors Aziz Choudry and Salim Vally have achieved something remarkable with The University & Social Justice, in that they have put together a multi-author collection that is a pleasure to read from cover to cover.”
– Labour/Le travail

This rich study offers a fresh analysis of conditions of resistance and sites of struggle in the institutions of higher education. The book extends theories of learning, resistance, and social movements into the realm of the oppositional aspiration of the youth; a long overdue undertaking.

This book offers us not only an important historical record of recent student mobilisations across the globe, but also a powerful resource for reimagining education as a struggle over knowledge and the future.

– Arathi Sriprakash, author of Pedagogies for Development: The Politics and Practice of Child-Centred Education in India

The transformative contributions of students and scholars across the globe are brought to life in this important collection. Carefully curated by Aziz Choudry and Salim Vally, this book offers fresh and insightful perspectives on the interface between social movements and post-secondary education.

This brilliant collection of studies on university-based activism is essential reading for anyone concerned with the state of higher education. The stories told document inspiring struggles across the globe that connect to broader social movements, and offer lessons for what needs to be done to confront the multiple crises our world faces today.

– Steven J. Klees, co-editor of The World Bank and Education: Critiques and Alternatives