Honeymooning and Tourism at Niagara Falls 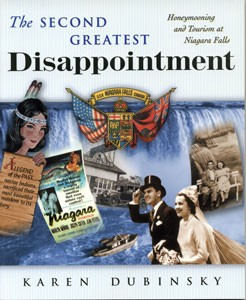 A lively and wide-ranging work on the history of the North American honeymoon, and, of necessity, the tourist industry at Niagara Falls. Dubinsky charts the growth of Niagara Falls as a tourist destination from the 1850s to the 1960s and explains how it acquired its reputation as the “Honeymoon Capital of the World.” Ultimately, the author asks: Of all the ways to promote a waterfall, why honeymoons?

The Falls at Niagara present a timeless picture: water meets gravity. Karen Dubinsky has made a fascinating study of the constantly changing frame that surrounds this immutable scene. Dubinsky illuminates the rhetoric of the Falls as a classic boast of the white man’s superiority over nature, non-Angle Saxons, and the little missus. Believe it or not, I read the whole book! (Call Ripley’s!)

From grand wedding tours to heart-shaped beds, Dubinsky insightfully traces the role of the honeymoon in the history of heterosexuality. In the process she reveals how “natural” attractions–whether waterfalls or love–are indeed produced in social, cultural, and historical contexts. An informative and entertaining tour.

– Kathy Peiss, University of Massachusetts, author of Hope in a Jar: The Making of America’s Beauty Culture

Thoughtful, illuminating, and witty … By showing how the honeymoon, like tourism, became an item of mass consumption, this fascinating book offers striking new perspectives on the history of marriage, heterosexuality, and consumption in the twentieth century.