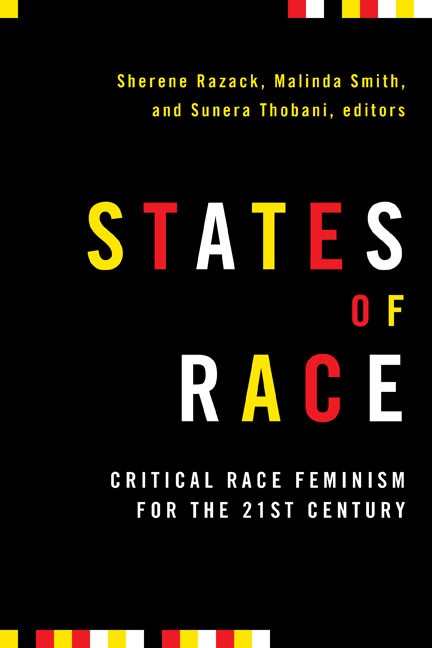 What is a Canadian critical race feminism?

Critical race feminism, like critical race theory more broadly, interrogates questions about race and gender through an emancipatory lens, posing fundamental questions about the persistence if not magnification of race and the “colour line” in the twenty-first century. The writers of these articles – whether exploring campus politics around issues of equity, the media’s circulation of ideas about a tolerant multicultural and feminist Canada, security practices that confine people of colour to spaces of exception, Indigenous women’s navigation of both nationalism and feminism, Western feminist responses to the War on Terror, or the new forms of whiteness that persist in ideas about a post-racial world or in transnational movements for social justice – insist that we must study racialized power in all its gender and class dimensions.

The contributors are all members of Researchers and Academics of Colour for Equity.

Sherene Razack is a Professor in the Department of Sociology and Equity Studies, University of Toronto. She is the author and editor of a number of books, including Casting Out: The Eviction of Muslims from Western Law and Politics, and Race, Space, and the Law: Unmapping a White Settler Society. Sunera Thobani is an Assistant Professor at the Centre for Women’s and Gender Studies, University of British Columbia. She is the author of Exalted Subjects: Studies in the Making of Race and Nation in Canada. Malinda Smith is an Associate Professor in the Department of Political Science, University of Alberta, and author of Beyond the ‘African Tragedy’: Discourses on Development and the Global Economy.

States of Race will be useful for those already knowledgeable about the subject, as well as for novices. [It] is a valuable resource for anyone interested in critical race feminism and its application in a Canadian context.

A refreshing and thoughtful collection that explores a range of realities faced by women and feminists of colour…. The editors and contributors have interwoven critical race and transnational feminism, post-structuralist feminist theory, and philosophy to offer incisive analyses on a range of current topics of interest to all critical thinkers across the globe. This volume – subtle, illuminating and accessible – should be required reading for students and faculty in critical race theory, women’s studies, and political and feminist philosophy courses.

With theoretical sophistication and analytical brilliance, this collection is essential reading that provides readers with critical tools to understand the relation between Canadian (and North American) racisms, neoliberalism, and the War on Terror. These eight essays incisively reveal the multiple, interconnected, and transnational projects of racism through a critical race feminism that is an exemplary practice of solidarity, coalition, and critique.