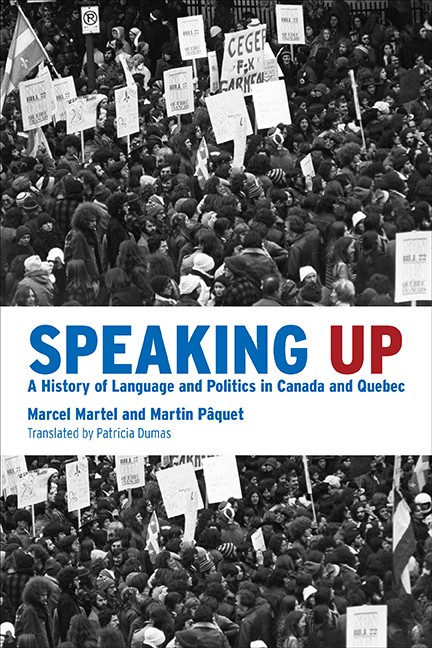 A History of Language and Politics in Canada and Quebec

By Marcel Martel and Martin Pâquet

Language issues have always been subject to debate in Canada. From the Conquest to the Quiet Revolution to the crisis of Regulation 17 to the various judgments of the Supreme Court, these often virulent debates have mobilized citizens—deeply concerned about recognition of their language and their rights—in the street, the media, or the courts. The state has responded with commissions of inquiry, legislation and legal action, and even police surveillance of citizens.

Speaking Up captures the complex and fascinating history of the relationship between language and politics in Canada and Quebec from 1539 to the present. Nuanced and unbiased yet empathetic, the book reveals that the language issue has been at the heart of this country’s political life for centuries.

Translated from the multiple-award-winning Langue et politique au Canada et au Québec (Boréal, 2010). We acknowledge the financial support of the Government of Canada through the National Translation Program for Book Publishing for our translation activities.

Martel and Pâquet leave no doubt about the centrality of language to political life in Canada and Quebec. A must read for anyone wishing to understand language debates in Canada’s past and present.

[Speaking Up] has a broad national scope, complimented by detailed analysis, which makes it well-balanced and useful to both students and experts of the field.

Speaking Up is an indispensable guide for anyone seeking to understand the place of language in Quebec politics. It is impossible to understand this province, or the desire of some here for independence, without an understanding of the historical context that defines the Québécois identity. Meticulously researched and comprehensive in scope, Speaking Up provides exactly that context. It should be required reading for English-Canadian pundits, most of whom so profoundly misunderstand this province.

Through its impressive national scope, Speaking Up sheds new light on the history of minority-majority relations in the country. With a subtle understanding of the concerns of linguistic groups, primarily French and English, but also including Aboriginal and other languages, Martel and Pâquet deliver an engaging and convincing exploration of ethnic identities, schooling conflicts, and communication politics in a complex country.