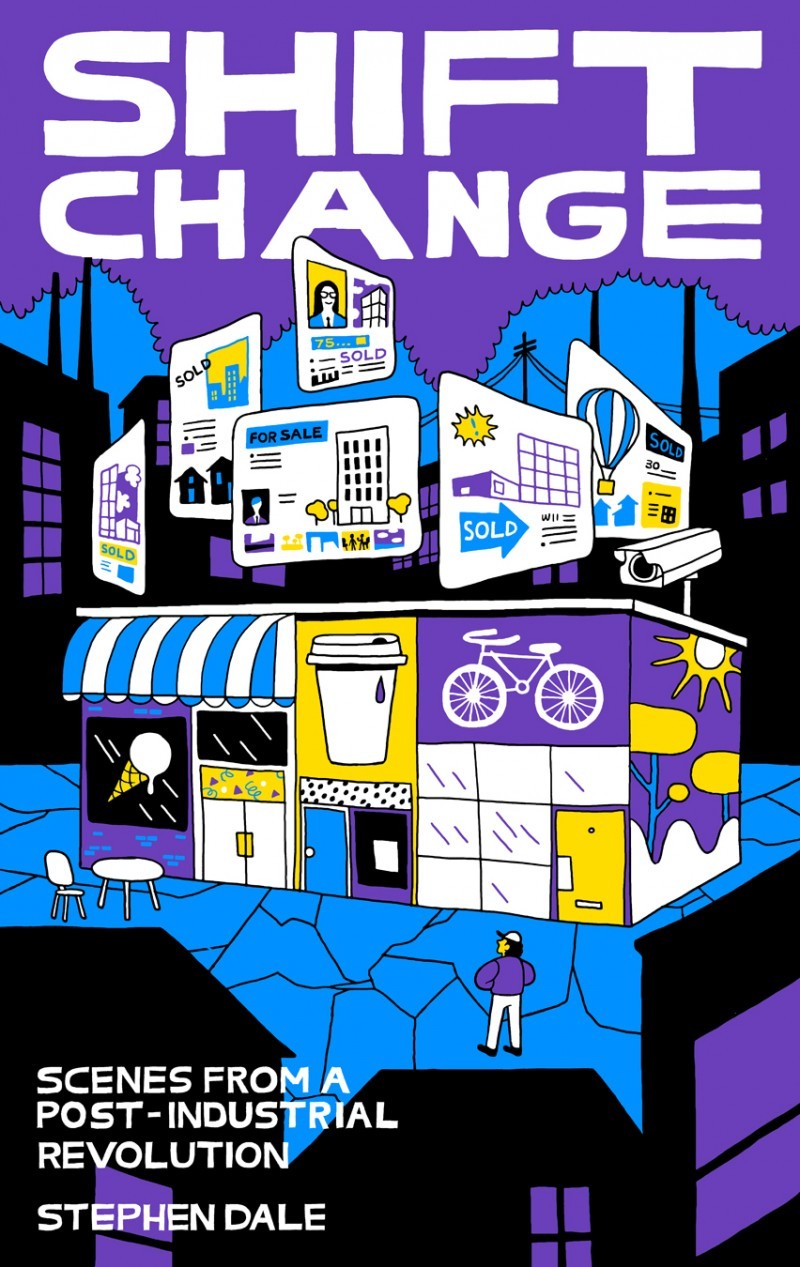 Hamilton’s industrial age is over. In the steel capital of Canada, there are no more skies lit red by foundries at sunset, no more traffic jams at shift change. Instead, an urban renaissance is taking shape. But who wins and who loses in the city’s not-too-distant future? Is it possible to lift a downtrodden, post-industrial city out of poverty in a way that benefits people across the social spectrum, not just a wealthy elite?

In Shift Change, author Stephen Dale sets up “the Hammer” as a battlefield, a laboratory, a chessboard. As investors cash in on a real estate gold rush and the all-too-familiar wheels of gentrification begin to turn, there’s still a rare opportunity for both old-guard and newcomer Hamiltonians to come together and write a different story—one in which Steeltown becomes an economically diverse and inclusive urban centre for all.

What plays out in these pages and at this very moment is a real-time case study that will capture the attention and the imagination of anyone interested in equitable redevelopment, housing activism, and social justice in the North American city.

“Stephen Dale’s textured analysis of urban change and conflict in his hometown of Hamilton is a timely study and potential model for future research. Dale has provided a unique glimpse into the social and cultural landscape of contemporary Hamilton and the people who are fighting to shape its future. Shift Change will be of value to anyone interested in gentrification, urban change, and the interconnected challenges faced by post-industrial cities across the Global North.”

“Shift Change offers a nuanced perspective on an all-too-familiar story, that of gentrification inevitably engulfing a working-class town. Dale insists that Hamilton can resist this narrative and emerge from decline as a city with a place, and a future, for everyone.”

– Leslie Kern, Associate Professor of Women’s and Gender Studies and Geography and Environment, Mount Allison University, author of Feminist City: A Field Guide and Gentrification is Inevitable and Other Lies

“Outsiders still give Hamilton a bad rap. But hometown boy takes stock of the city’s turnaround while it’s still in progress. Informed, engaging, passionate—why can’t we have more books like this about Canada’s cities?”

“Hamilton is an aging industrial centre that has made the transition to a post-industrial setting. Tough challenges remain, including poverty, gentrification, lack of affordable housing, and inequality. Stephen Dale ably uses his interviewing skills to provide a unique perspective in Shift Change that is honest, enlightening, and not without hope for the future of his hometown.”

“Shift Change has the reach and the importance no doubt hoped for by its author. Combining wide-ranging comparative research with many rich interviews of key participants, the author outlines how Hamilton, Ontario, like many other de-industrialized cities and regions, is in the throes of an epic battle for its place in a post-industrial world. No longer a lunch bucket steel town, the combatants are not behemoth manufacturers versus powerful trade unions, but gentifying developers and their Toronto-come-lately customers versus a determined, but far from united, array of affordable housing and anti-poverty activists and organizations, who draw upon the city’s history of community solidarities and collective struggles to argue for a post-industrial pathway that retains Hamilton’s egalitarian heart and soul. As Shift Change optimistically concludes, that remains a road that is there to be taken.”

“A must-read for anyone concerned about gentrification and displacement in our cities. This is an excellent analysis of both the challenges and opportunities we are facing in trying to manage rapid economic change in my hometown of Hamilton, Ontario.”

“Stephen Dale’s fast-moving, yet nuanced, portrait of his hometown is the intelligent book that Hamilton deserves and all of urban(ist) Canada needs. Dale diverts our attention from the ‘big smoke’ of the global city and reveals the trials and temptations of life and politics in the rest of the urban nation.”

“Stephen Dale’s absorbing book brings to life the complexity of Hamilton’s history as a blue-collar steel town and its emergence as an attraction for artists, creatives, and Torontonians seeking an affordable lifestyle—and compromising it for others in the process. There are important sociological lessons and cautions here for communities trying to redefine themselves post-industrialization.”