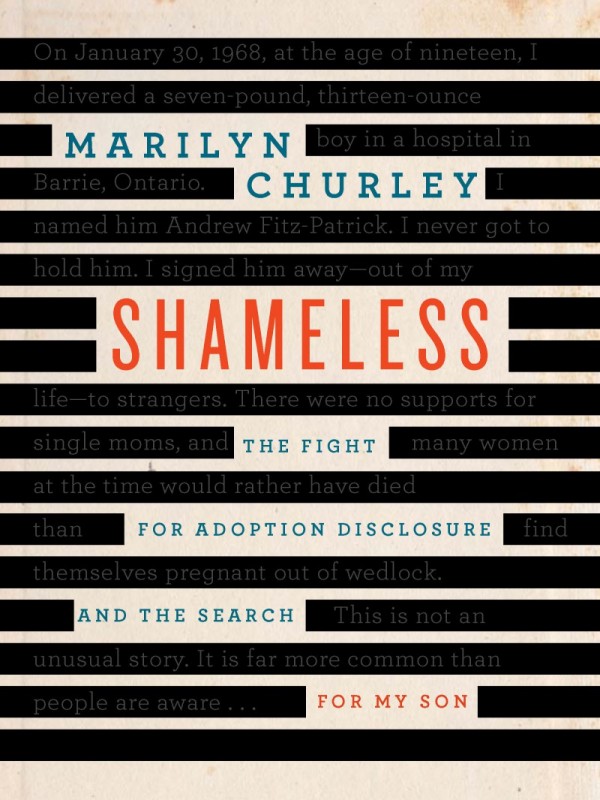 In the late 1960s, at the age of eighteen and living far from home amidst the thriving counterculture of Ottawa, Marilyn Churley got pregnant. Like thousands of other women of the time she kept the event a secret. Faced with few options, she gave the baby up for adoption.

Over twenty years later, as the Ontario NDP government’s minister responsible for all birth, death, and adoption records, including those of her own child, Churley found herself in a surprising and powerful position – fully engaged in the long and difficult battle to reform adoption disclosure laws and find her son.

Both a personal and political story, Shameless is a powerful memoir about a mother’s struggle with loss, love, secrets, and lies – and an adoption system shrouded in shame.

Her astonishing life journey—from hippie teenager to cabinet minister—was propelled by a passionate secret that Marilyn Churley had to hide in a cruelly sexist Canada. In a remarkable twist of fate, she became the poised woman who changed the very law that had tormented her for decades, an act that brought her full circle to a joyous fulfillment.

Marilyn provides a rare insider’s view of the power of political change and proves with Shameless that she is as fearless as a writer as she was as a politician.

Shameless is a fantastic book. Marilyn’s story reflects a similar journey that both myself and my birth mother, Joni Mitchell, experienced and the joy we felt when we reunited. Secrecy was so entrenched that it took years just to get a piece of paper that didn’t even have her name on it. Because of the changes in adoption disclosure laws, people can now get the information they need to search. Thanks Marilyn!

Marilyn Churley has skilfully interwoven personal and political narratives detailing the struggle to know one’s history and kin. Through her courageous determination, she has made a lasting contribution to opening adoption records. This book stands as a testament to what a principled politician can accomplish.

– Michael Grand, Professor of Clinical Psychology, University of Guelph and author of The Adoption Constellation

Shameless will counter stereotypes and reverse the undeserved shame suffered by the many millions of us who experienced the tragic non-choice of surrendering our babies to adoption. We are ordinary women—teachers, administrators, lawyers, healthcare workers, and politicians—trapped in extraordinary circumstances. Coming forward in the Ontario legislature as one of us, and holding the standard of open records through difficult years, Marilyn joined with the grassroots in wrenching adoption out of shadowy decades of damaging secrecy. This is a story that needs to be shared in schools of social work, halls of medicine, and pulpits everywhere.

The million-plus members of Ontario’s adoption community owe a debt of thanks to Marilyn Churley. Without her integrity, and her willingness to stand up and be counted among us, we might still be waiting for access to our own records. Shameless is Churley’s modest account of the impact her reunion and her advocacy in the Ontario Legislature played in redressing the wrongs imposed by sealed records.

While the decade-plus-long struggle for adoption disclosure law reform had personal meaning for Marilyn, her passionate and tireless efforts were driven by her fierce commitment to justice and equality and her desire to give voice to those who needed an advocate inside the chambers of power.

Shameless documents the personal and the political and how, when they come together, change gets made.

I wept. I didn’t expect to, but I wept. I wept for Marilyn’s humiliations, her loss, her joy of reuniting with her son, her determination, her dogged determination to change the system, her passion and compassion. I wept because with honesty and candor Marilyn took me with her: ‘unwed’ mom, birth mother, alone again, married woman, mom again, elected politician. She took me with her to places I had never been. Perhaps you have been there yourself and it will be familiar. If not, you will experience the complexities, the surprising brutality, the love, the hope of young moms longing for their own. As a politician Marilyn gets it right! The marriage of compassion and justice, real social justice influencing policy. Read this book and believe it is possible.

Never did a Bill signed into law hold such emotion for so many! That was the adoption law that finally made its way through the Ontario legislature. Marilyn may have been on the other side of the House, but she worked with me to open adoption records, all partisanship aside. The chronicling of her life through Shameless is inspiring. It’s clear the new law was the moment for Marilyn to exhale, and for the adoption community to cheer.