The Power of Naming and Claiming 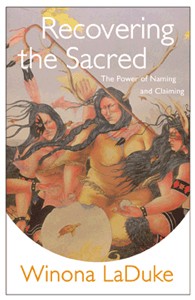 When she invites us to “recover the sacred,” Native American organizer Winona LaDuke is requesting far more than the rescue of ancient bones and beaded headbands from museums. For LaDuke, only the power to define what is sacred – and gain access to it – will enable Native American communities to remember who they are and fashion their future. Based on a wealth of research and hundreds of interviews with indigenous scholars and activists, LaDuke’s book examines the connections between sacred sites, sacred objects, and the sacred bodies of her people, focusing on the conditions under which traditional beliefs can best be practiced.

Describing the numerous gaps between mainstream and indigenous thinking, she probes the paradoxes that abound for peoples of the Americas and points a way forward for Native Americans and their allies.

Winona LaDuke reminds us that colonialism is alive and well in the Americas with universities, business and government continuing to attempt to appropriate indigenous lands, cultural artifacts and genetic history. At the same time, a sense of optimism pervades Recovering the Sacred, with the book showing us how indigenous peoples have resisted these colonialisms. In doing so, Winona LaDuke provides us with a potential road map to the future.

Winona LaDuke is one of America’s most important writers, and this is her most important book. With precision and eloquence, she makes clear not only that the theft of all things indigenous continues to this day but also that resistance to this theft is becoming ever stronger. She makes equally clear that if we are to survive we must stop stealing from and begin listening to those humans and nonhumans whose land we have stolen, whose land we live on.

Winona LaDuke is a great national resource, and this powerful book is a must for environmentalists and all others thinking about the roots and destiny of this landscape.

Recovering the Sacred is essential reading for any class that covers Native religion and spirituality. LaDuke skillfully demonstrates why the protection of Native spiritual practices is critical to social justice struggles and to the survival of the planet. She weaves together a broad range of issues that all point to the impact of European cultural and spiritual genocide on indigenous peoples. LaDuke demonstrates again why she is one of the leading Native thinkers and activists today.