Oligarchy, Collapse, and the Crisis of Civilization 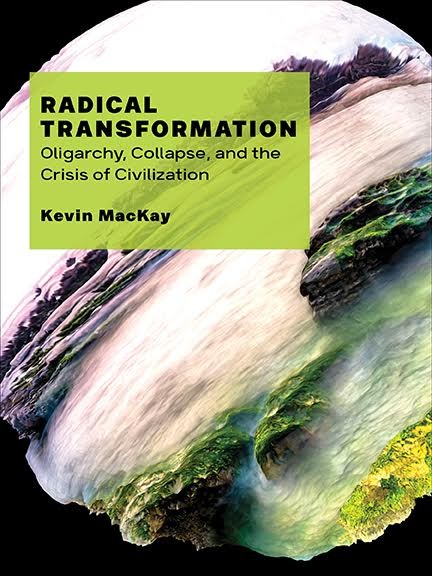 “Radical Transformation is a tour de force.”– Thomas Homer-Dixon, author of The Upside of Down: Catastrophe, Creativity and the Renewal of Civilization

Radical Transformation is a story about industrial civilization’s impending collapse, and about the possibilities of averting this fate. Human communities first emerged as egalitarian, democratic groups that existed in symbiotic relationship with their environments. Increasing complexity led to the emergence of oligarchy, in which societies became captive to the logic of domination, exploitation, and ecological destruction. The challenge facing us today is to build a movement that will radically transform civilization and once more align our evolutionary trajectory in the direction of democracy, equality, and ecological sustainability.

Kevin MacKay has written a wonderfully lucid yet thoroughly uncompromising account of our world’s crisis. Drawing on a vast knowledge of history, human evolution, philosophy, and modern complexity theory, he tells a story that recognizes the marvels of human civilization while revealing its dark tendency towards oligarchic structures of power and exploitation. He then shows us how we can respond to preserve the best while defeating the worst. Radical Transformation is a tour de force.

– Thomas Homer-Dixon, author of The Upside of Down: Catastrophe, Creativity and the Renewal of Civilization

Radical Transformation is a bold and distinguished vision of how society must rethink its economics and ideals in order to preserve the earth and itself in the twenty-first century. Anyone interested in the ways that current politics and practices impinge on justice and the future of life on earth will want to read this remarkable book.

– Carolyn Merchant, professor of environmental history, philosophy, and ethics, University of California, Berkeley and author of The Death of Nature; Ecological Revolutions; and Autonomous Nature

Kevin MacKay forges an inspiring and empowering repertoire of new ways to think and act collectively to defend our social and ecological life systems. Radical Transformation offers an honest, fresh perspective on the most pressing question of our time: how ordinary people, working together on the basis of solidarity, cooperation, and direct action, can rescue the future from the destructive systems and corrupt oligarchs that threaten it. MacKay’s arguments deserve a wide audience and a lively debate.

– Stephen D’Arcy, associate professor of philosophy, Huron University College, author of Languages of the Unheard: Why Militant Protest is Good for Democracy

Kevin MacKay has produced an eyes-wide-open account of our civilizational crisis. With rare honesty and integrity, his Radical Transformation embodies a radicalism in the best sense of going to the root of the matter and its implications for our embattled species. MacKay moves effortlessly from the local to the universal and back again to tease out our human foibles and possibilities. A cri de ceour for sense and sanity in the face of the bulldozers of mindless growth.

Radical Transformation provides a lucid overview of a central issue of our times: the potential collapse of industrial civilization and the political changes needed to avoid it. Kevin McKay argues convincingly that an egalitarian, democratic political culture, which reigned for much of human history, is a prerequisite for avoiding cataclysm. Read this important book and join the movements working for radical transformation.

– Yves Engler, co-author of Stop Signs: Cars and Capitalism on the Road to Economic, Social and Ecological Decay

Techno-industrial society is in a perilous state of ecological overshoot and decaying social order but seems paralyzed to inaction. Fatal implosion seems inevitable. Kevin MacKay traces this conundrum to a drearily repeating historical cycle in which economic and political elites establish oligarchic control of moral authority. Meanwhile, ordinary citizens conspire in their own demise through misplaced fealty to the hegemonic powers that rule them. In a gut-wrenching analysis of this Death System’s pathology and consequences MacKay shows why mere reform is no remedy–any real solution resides in society’s radical transformation. The question is whether modern society is already too far gone to reinvent itself. Let the reader ponder the odds that we can yet establish an eco-centric social democracy—a Life System—that truly reflects humanity’s unique high intelligence, moral vision, and cooperative nature.

Radical Transformation is a brilliant, provocative book. It argues that today’s “Death System” of oligarchic power is promoting global economic and ecosystem collapse. Before it is too late, Kevin MacKay calls on us to create a new “System of Life” based on cooperative, moral communities and a genuinely democratic, socialist, and ecological politics. This book can play an important part in helping to make this alternative politics of life and hope a reality.

In its power to reframe our contemporary problems—borrowing from left analysis, for example, while helping us to see through a simplistic left-right dichotomy—Kevin MacKay’s extremely thoughtful book helps us discern what “Life System revolutionaries” are and how they can recognize the path they must take.