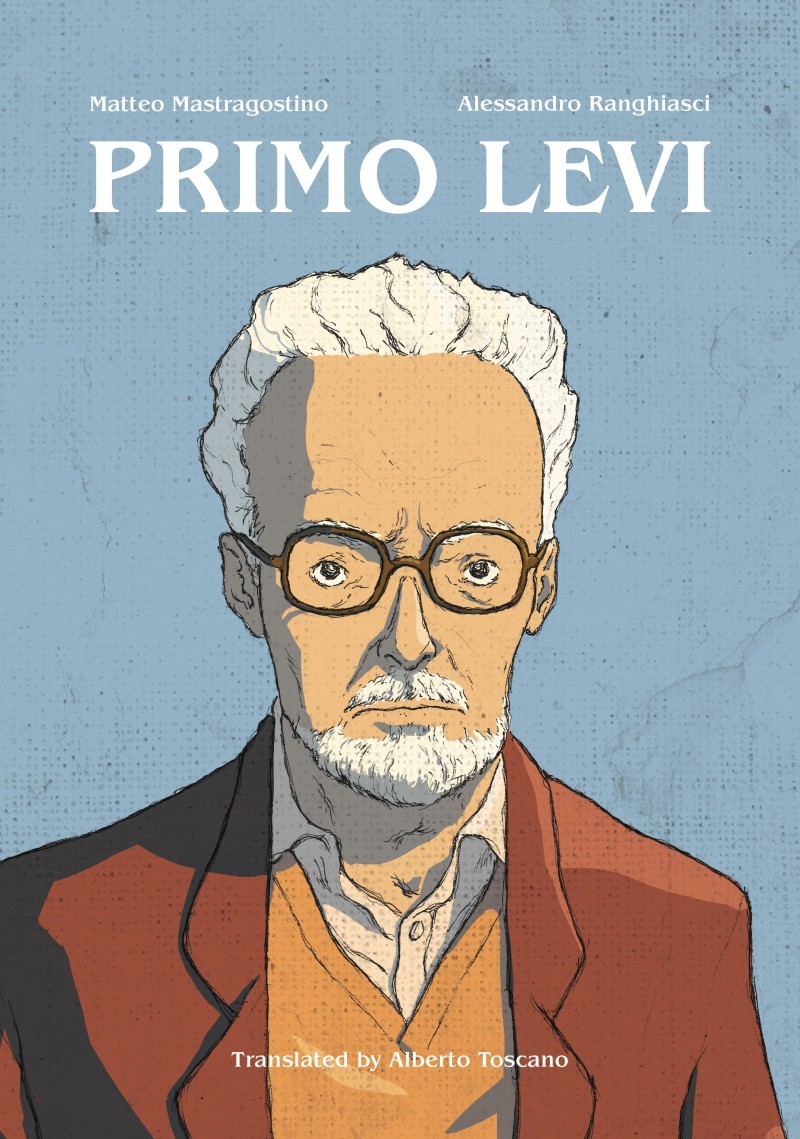 “It’s a pretty long story,” Primo Levi tells a classroom of children, “so I’ll try to make it simple.”

Translated from the original Italian, this hauntingly illustrated comic tells the story of the Italian Jewish chemist who survived the camps at Auschwitz against all odds. Matteo Mastragostino draws on historical research, interviews, and Levi’s own landmark books to piece together a fictionalized yet profoundly intimate portrait of a courageous figure.

In the scene that emerges, Levi visits a group of schoolchildren to retell his life story and keep the memory of the Holocaust alive, answering innocent questions with hard truths. Sobering yet tender, Primo Levi extends a rare opportunity for readers both young and old to deepen their understanding of life, death, and the human spirit.

Written in prose that is affecting and poignant, set against illustrations that are stark and realistic, the story beautifully illustrates Levi’s strength and determination as well as his suffering and despair. This is an important story that is not only a tribute to Primo Levi, but an example of how and why this history must be passed on to the next generation.

– Kathy Kacer, award-winning author of children’s books on the Holocaust, including The Brushmaker’s Daughter and Louder Than Words

Don’t let the black-and-white pages of Primo Levi mislead you. Matteo Mastragostino and Alessandro Ranghiasci have created a compellingly rich portrait of both the art of resistance and art of remembrance. Despite having his soul tortured by fascism and Jewish heart forever wounded, Levi as imagined in this illustrated comic cannot turn away from the task articulated by Rabbi Tarfon, Pirke Avot 2:21: “It is not your responsibility to finish the work of perfecting the world, but you are not free to desist from it either.” A poignant, powerful read, if not a call to anti-fascist duty!

– Cindy Milstein, Editor of There Is Nothing So Whole as a Broken Heart: Mending the World as Jewish Anarchists

Translating Primo Levi’s life and work into images, and describing his conception of memory with language accessible to everyone, without impoverishing or betraying his message, is a real challenge. Beautiful and meaningful at the same time, Primo Levi is a great accomplishment.

An extraordinary work of remembrance, with very fine comic art to tell the story.

– Paul Buhle, retired senior lecturer, Brown University, and co-editor of Ballad of an American: A Graphic biography of Paul Robeson

When war ends, memories haunt. A guest speaker enters the classroom and writes six numbers—174517—on the chalkboard. The guest is Primo Levi, an Italian chemist, writers, and Holocaust survivor. These are the six numbers tattooed on his left arm. They help weave a story told to the children of the persecution and horror of the Holocaust, and the power and limits of the human spirit. Through the purposefully simple storytelling of Matteo Mastragostino and the brave visualizations of Alessandro Ranghiasci, this graphic history compels a new generation of readers to grapple with the unimaginable and to remember the ugliness of war and oppression.

– Zelda Abramson and John Lynch, co-authors of The Montreal Shtetl: Making Home After the Holocaust

We should take inspiration from Levi’s words in this story when he says ‘one should never lose hope.’ Fascism is once again rearing its ugly head around the world, and Levi’s life story provides us with the hope, courage, and determination to defeat it.

A beautiful rendition of Primo Levi’s life story and the horrors of the Holocaust, brought to life by Ranghiasci’s subtle and ethereal illustrations.

– Kate Evans, author of Red Rosa: A Graphic Biography of Rosa Luxemburg and Threads from the Refugee Crisis