The Politics of Exclusion 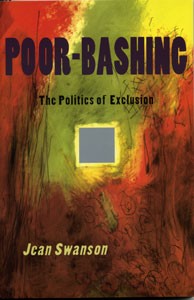 Out of Stock – Inquire about availability

The special language of poor-bashing disguises the real causes of poverty, hurts and excludes people who are poor, cheapens the labour of people who have jobs, and takes the pressure off the rich.

Swanson, a twenty-five year veteran of anti-poverty work, exposes the ideology of poor-bashing in a clear, forceful style. She examines how media “poornography” operates when reporters cover poverty stories. She also reveals how government and corporate clients use poor-bashing focus groups. To make the book even more useful Swanson includes key chapters on the history of poor-bashing.

I am sure that anyone who has experienced living in poverty will find themselves saying “Yes sister, tell it like it is.” They will also say “I have always felt hurt by that behaviour or those words but was never able to identify it as poor-bashing until now.” And sadly, they will also say “I’ve always blamed myself for creating my poverty.” For those living in poverty, this book delivers truth, and freedom, and power.

Poor-Bashing is a dynamic and thorough indictment of Canada’s oppression of the poor. It’s also a powerful call for change among governments, corporations, charities, and among all Canadian citizens. Jean Swanson writes with a voice of righteous anger, with an eye to detail, and a keen sense of forgotten history and media bias.

Unlike more academic works, Swanson’s makes a direct connection between history, policy, socio-political structures, and the person in the street. Her arguments are easy to follow and her style is fresh.