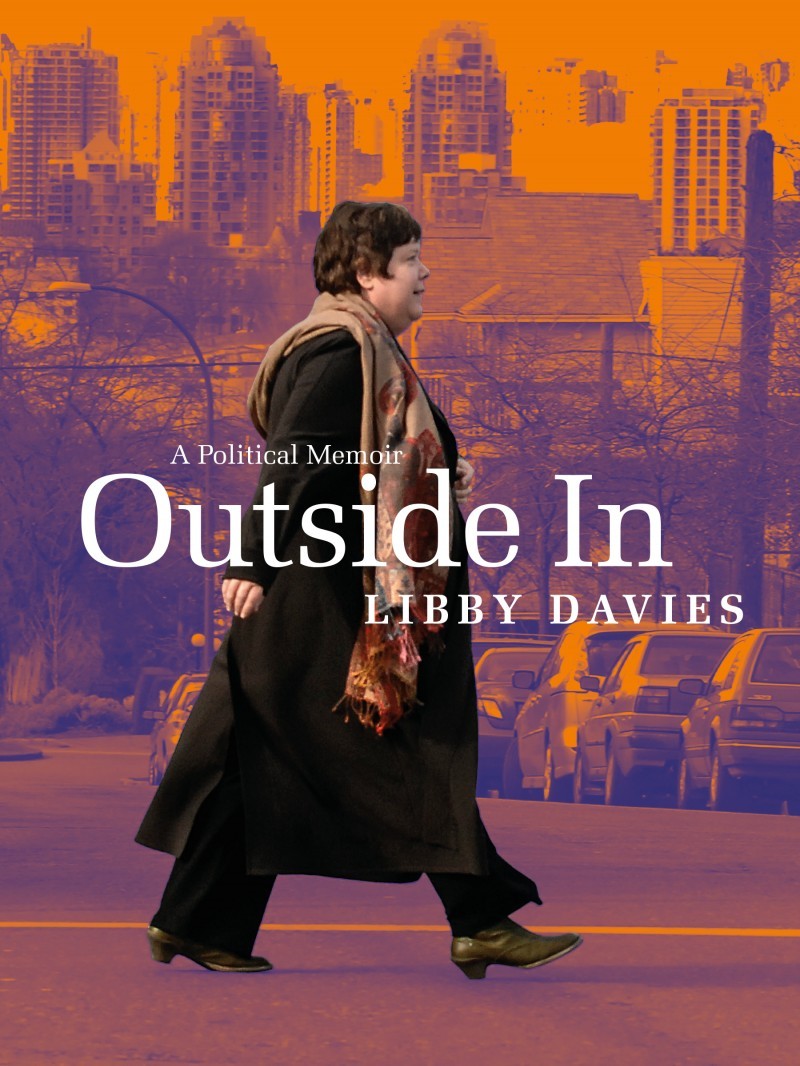 Libby Davies has worked steadfastly for social justice both inside parliament and out on the streets for more than four decades. At nine-teen, Davies became a community organizer in Vancouver’s Downtown Eastside. She went on to serve in municipal and then federal politics, advancing to the role of Deputy Leader of the New Democratic Party.

Davies looks back on her remarkable life and career with candid humour and heart-rending honesty. She addresses the challenges of her work on homelessness, sex workers’ rights, and ending drug prohibition. She illuminates the human strengths and foibles at the core of each issue, her own as well as those of her colleagues and activist allies. Davies’ astute political analysis offers an insider’s perspective that never loses touch with the people she fights alongside. Outside In is both a political and personal memoir of Davies’ forty years of work at the intersection of politics and social movements.

Libby Davies has always been a beacon of light in electoral politics. Coming from anti-poverty activism in Vancouver’s Skid Row, Libby brought the interests of the most marginalized people into the halls of Parliament. Now she has generously opened her life to us in an honest political memoir that provides an inside view of the most important political battles of our lifetime. Outside In is a fascinating read for anyone interested in how social change can happen in the halls of power.

– Judy Rebick, author of Heroes in My Head

From the volatile streets of Vancouver’s Downtown Eastside, all the way to Ottawa as a distinguished Member of Parliament, Libby Davies has spent her life fighting tirelessly for the most disenfranchised people in our nation. Written in a clear, remarkably readable style, Libby’s passion for social justice rings through on every page, while she reveals her personal journey with honesty and courage. Outside In is an inspiring, heartfelt, political memoir, the story of a woman hell bent on changing the world for the better.

In a time of peak cynicism about the political class, Libby has always been the exception. For decades, she has been a human bridge between the passions of activism and the pragmatism of the electoral sphere. It is no surprise then, that this book is quintessential Libby: principled and brave, full of energy and generosity.

– Naomi Klein, author of This Changes Everything

Outside In is essential reading for anyone wanting to make a better world and wondering what it takes to make it possible. Always from the perspective of a tireless organizer, Davies sees politics as dynamic process of power in constant flux where progressive change is always possible if you build a united community willing to fight for it. Community activist, parliamentarian, and fearless catalyst for change, Libby Davies melds the personal and the political, the outside agitator and inside legislator.

Passionate, unyielding, and strong, Libby shows how it is possible to hold on to core beliefs and effect transformative change for social justice both in the community and the political world.

– Olivia Chow, former NDP MP and author of My Journey

What a beautiful, page turning memoir by an activist politician! Libby Davies advocated fearlessly, boldly, and prophetically, from the first day she set foot in Parliament, for drug policies grounded in science, health, compassion, and human rights. This book is honest, reflective and revelatory – a true profile in courage.

Despite all obstacles, Libby Davies has been dedicated to confronting the most severe urban situation in modern Canadian history, the sorrows of which she bore with both equal parts outrage and compassion.

For 18 years I was proud to call Libby Davies my MP. And her fabulous book reminds me why. Libby has always been a true champion of the communities she represented – particularly the most marginalized people of the Downtown Eastside – while walking the halls of political power at both city hall and later as MP for Vancouver East. In her utterly captivating memoir, Libby offers deep insights into how to bridge the divide between electoral politics and social movements, and issues a compelling call for a bolder NDP.

This book reminds us of Libby Davies’ courageous and compassionate leadership in giving voice to the voiceless and hope and empowerment to the poor and the powerless in Vancouver and nationally. But this book also reminds us of Libby’s international leadership on Palestine, and on global health issues with the IPU and The Global Fund to Fight AIDS, TB and Malaria. Read this book, an inspiring and moving reminder that one dedicated woman can indeed change our world.

Libby Davies has spent her whole adult life pushing, cajoling, and persuading on behalf of those without power. Always with compassion and never with malice she went from Downtown Eastside Vancouver activist to be deputy leader of the NDP. This is a great story of a fearless woman.

In these pages Libby Davies documents her life in the Downtown Eastside from its earliest days: working largely as a volunteer, fighting for the downtrodden, the disenfranchised, the poor, the forgotten, and the discarded souls she always recognized and respected as neighbours and comrades. Davies writes as a true storyteller about her time in the trenches of the political left. I wish I could vote for Libby to be our next Prime Minister, but I can’t, so I will just encourage anyone who cares about our democratic system, or about changing the world from the outside in, to please read this book.

Outside In tells the incredible story of how Libby Davies burst into the halls of power and held the doors open for others. Along the way she introduces all the people she credits with making her journey possible. It is a generous, hopeful, and deeply personal book – I couldn’t put it down.

No one can speak to the intersection of social activism and the formal world of politics better than Libby Davies. Having cut her teeth on the hard streets of Eastside Vancouver, she never lost her passion for justice or her fight for the most marginalized, even when she rose to the halls of power in Ottawa. Libby tells us that one choice is not better than the other. The issue is how those who advocate for change at the grassroots level and those who seek political office work together toward common goals.

Libby’s memoir isn’t only a personal journey of strength and resilience, but also an incredible story of a passionate social organizer who became one of the finest politicians in Canada. In today’s state of pathetic populism, Libby’s personal political account is an inspiration for citizens looking for real change.

I’ve always known Libby Davies to be a principled and dedicated activist, but didn’t realize she had such an interesting story to tell. From her early rough-and-tumble years in Vancouver’s gritty east side to her later battles on Parliament Hill, her tale is both engaging and inspiring.

– Linda McQuaig, journalist and co-author of Billionaires’ Ball: Gluttony and Hubris in an Age of Epic Inequality

Outside In is supposed to be the story of Libby Davies’ life, but really it’s a handbook on organizing. Reading about her wins and losses, her work both outside and inside of electoral politics, and her ability to swallow her fear and work for a more just community and country is not only inspiring, but a call for us all to join in that work and a blueprint for how.