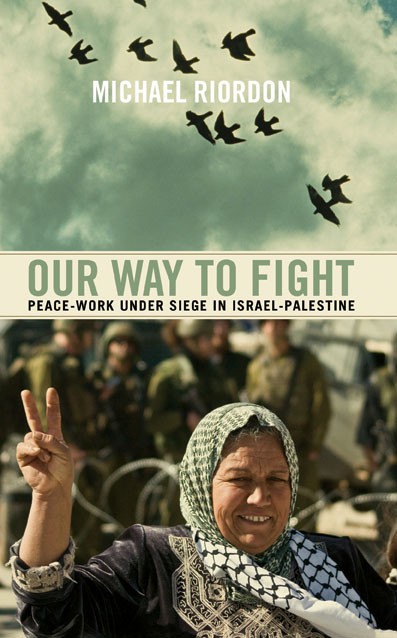 Our Way to Fight

Peace-Work Under Siege in Israel-Palestine

Our Way to Fight follows the dangerous lives of non-violent peace activists in Israel and Palestine. It explores crises that stirred them to act, the risks they face, and small victories that sustain them.

Michael Riordon takes us to thousand year-old olive groves, besieged villages, refugee camps, checkpoints and barracks. In the face of deepening conflict, Our Way to Fight offers courageous grassroots action on both sides of the wall, and points the way to a liveable future. These engaging stories will provide inspiration to peace activists in Israel, Palestine, and across the world.

A compelling compendium of first-hand accounts that chronicles modest yet meaningful reconciliation efforts from both sides… Riordon’s thoughtful portrayal of hope in a time of trouble is inspiring, and reminds us that activism is not magical, but rather a very human response to the conflicts that require people to make difficult moral choices.

Even while maintaining a sober assessment of the difficult road activists face, simply by demonstrating that Israelis and Palestinians can and do work in common cause, Riordon offers an important corrective to the standard tale of an intractable conflict.

A book like a pocket lamp that contests darkness: the darkness fabricated by those who have promoted a global blindness concerning what has happened in Palestine and Israel during the last sixty years. The battery of this remarkable lamp is true observation, and with it you discover exemplary courage in the most unexpected places. Pocket it!

– John Berger, author of From A to X, a novel inspired by the people of Palestine

By getting his elbows dirty in the streets and villages and finding echoes of shared experiences among his interview subjects, he illuminates unmistakable violations of human rights, as well as affirming stories of human courage. Our Way to Fight is the kind of work that stirs a valuable kind of anger, its truths no less powerful for being incomplete.

Our Way to Fight explores the stories of men and women who create glimmers of light and hope in the dark despair surrounding the Israeli-Palestinian conflict. A close look at activists who dedicate their lives to the struggle for social justice, Michael Riordon’s portraits reveal what it means to be a courageous person, a seeker of truth. This is a vital intervention for all who care about peace and justice.

Riordon is a skillful writer who takes the reader on a journey through the back roads of Palestine and Israel to meet these people and experience the reality of their lives from close up … A deeply sensitive account of the human face of the conflict.