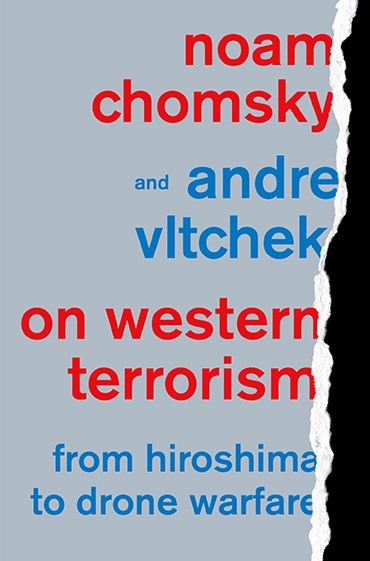 From Hiroshima to Drone Warfare

By Noam Chomsky and Andre Vltchek

In On Western Terrorism Noam Chomsky, world-renowned dissident intellectual, discusses Western power and propaganda with filmmaker and investigative journalist Andre Vltchek. The discussion weaves historical narrative with the two men’s personal experiences, which have led them to a life of activism.

Beginning with the New York newsstand where Chomsky first began his political education as a teenager, the discussion broadens out to the shifting forms of imperial control and the Western propaganda apparatus. Along the way Chomsky and Vltchek touch upon many countries of which they have personal experience, including Nicaragua, Cuba, China, Chile, and Turkey.

A blast of fresh air which blows away the cobwebs of propaganda and deception, On Western Terrorism is a powerful critique of the West’s role in the world and a testament to two lives dedicated to humanism, activism, and the search for knowledge.

Andre Vltchek is in the great tradition of investigative journalists like John Pilger, Seymour Hersh, and Robert Fisk. He combines omnivorous curiosity with fearless tenacity.

Andre Vltchek is a powerfully informed writer whose reports are based on first-hand observations.

– Michael Parenti, author of The Face of Imperialism

It makes for enlightening, provocative and revealing reading and it’s a welcome antidote to the plethora of books and films on the ‘horrors’ of communism.

Chomsky’s maturity has endowed him wisdom that acts as a complement to his astonishing command over the specifics of the whole spectrum of political concerns.

Chomsky is undoubtedly one of the greatest radical thinkers and one should give him credit for the humility and curiosity he demonstrates throughout the book.

– Marx and Philosophy Review of Books

Noam Chomsky is a global phenomenon…He may be the most widely read American voice on foreign policy on the planet.

[Chomsky is] the closest thing in the English-speaking world to an intellectual superstar.

It is absolutely essential reading for anyone wishing to understand the current context of contemporary geo-politics by revealing the often-hidden histories that have given rise to it, as well as highlighting the pressing issues facing the world which are usually ignored going forward.