Not Paved With Gold

Italian-Canadian Immigrants in the 1970s 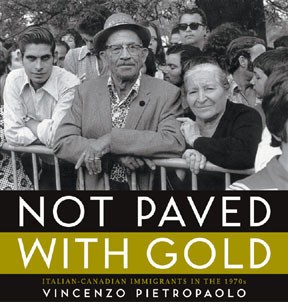 This collection of stunning photographs and inspired commentary documents the lives of Italian immigrants to Toronto. Award-winning photographer and cultural historian Vincenzo Pietropaolo has spent much of his life taking pictures inside the tightly knit Italian-Canadian community. While the images in this book are part of the fabric of life in Toronto, they transcend the specificity of place to evoke the lives of immigrants in cities around the world.

With a foreword by novelist Nino Ricci, and context provided by the photographer, Not Paved with Gold pays tribute to the broad spectrum of the immigrant experience.

As Pietropaolo makes clear in his introduction, the photographs in this book have a very specific and personal meaning for him, coming out of his own experience of growing up the son of Italian immigrants. Pietropaolo’s work has ranged across many subjects. But in all his work that first informing sensibility that derives from his immigrant background is still present-it is what gives his work its humanity, its tone, the sense of a complicity, as Pietropaolo says, between the viewer and the viewed. In this book, that complicity comes through as a rare feeling of insidedness, as if the photographer were not merely an observer but had somehow placed himself side by side with his subjects.

– From the foreword by Nino Ricci