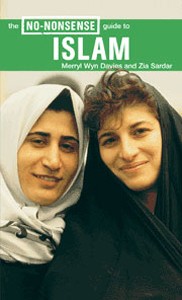 Even before September 11, 2001, Muslims were often framed by Western media and many non-Muslims as enemies of “freedom” and “progress.” Like other religions, Islam is not without its ongoing tensions and struggles. However, like other religions, there is a depth and richness to the Islamic faith that is too often overlooked because of stereotypes.

This No-Nonsense Guide looks at the complexities of Islam and how its adherents are reconciling their faith with the social realities of the twenty-first century. In so doing, Merryl Wyn Davies and Zia Sardar examine the Qur’an and Islamic law (sharia), how world history has been shaped by Islam, Islam’s rocky relationship with the Western world, and the many challenges within and without Islam.

The *No-Nonsense Guide to Islam *is a warts-and-all guide to the complex world of Islam. Sardar and Davies show what Islam has achieved; and what it is capable of achieving. They suggest how both Islam and the West can transform themselves to see each other as fully human and capable of laying the foundation for a just world order.