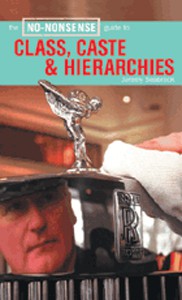 Upper, middle, or lower? Which class are you? Hierarchies and rankings have been with us since the earliest times and, as Seabrook argues, they show no sign of disappearing yet. Those at the top would have too much to lose.

This No-Nonsense Guide gives the full picture of how class analysis emerged from earlier categorizations, and how it affected and still affects people’s lives even today in our globalized world.

For as long as I have been writing about North-South issues–and that’s longer than I care to remember–the New Internationalist has been there with pungent, pithy, probing, political analysis. Now they’ve had the bright idea to encapsulate some of their accumulated wisdom in the No-Nonsense Guides. You can’t go wrong–I personally intend to order the whole series.

– Susan George, associate director of the Transnational Institute, and author of The Debt Trap and The Lugano Report

The No-Nonsense Guide to Class, Caste and Hierarchies is especially valuable in the way it identifies the new class of the rich, the celebrities and others who play “a significant role in reconciling the poor to their status”. This book is timely, authoritative… excellent.