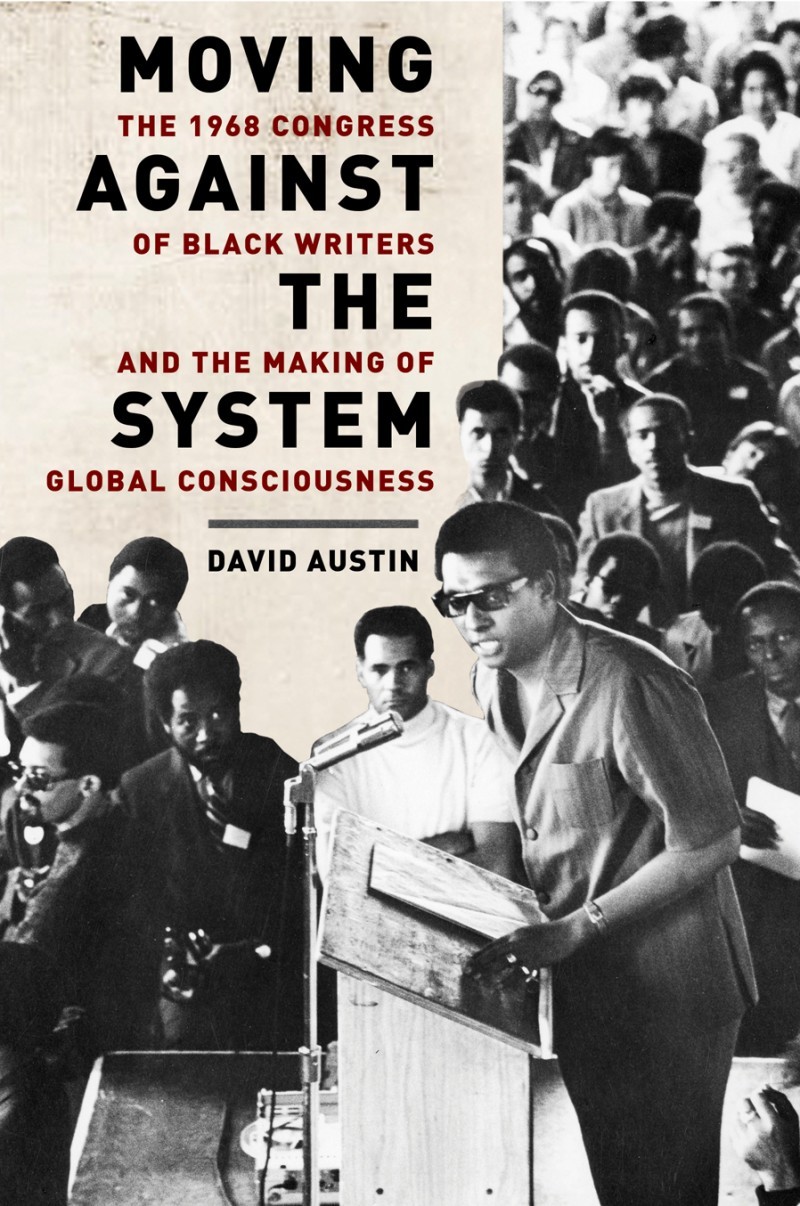 Out now on audiobook! Includes the original audio recordings of the 1968 Congress of Black Writers

In 1968, as protests shook France and war raged in Vietnam, the giants of Black radical politics descended on Montreal to discuss the unique challenges and struggles facing their brothers and sisters. For the first time since 1968, David Austin brings alive the speeches and debates of the most important international gathering of Black radicals of the era.

Against a backdrop of widespread racism in the West, and colonialism and imperialism in the “Third World,” this group of activists, writers, and political figures gathered to discuss the history and struggles of people of African descent and the meaning of Black Power.

With never-before-seen texts from Stokely Carmichael, Walter Rodney, and C.L.R. James, Moving Against the System will prove invaluable to anyone interested in Black radical thought, as well as capturing a crucial moment of the political activity around 1968.

“Like Stokely Carmichael and so many others who participated in the 1968 Congress of Black Writers in Montreal, David Austin seeks to transform the paradigm. Moving Against the System represents a singular contribution to our understanding of the intellectual and political convergence of that historical moment, including the cross-currents and tensions within the emerging black radical tradition. With this book, Austin further establishes himself as a leading light within that tradition.”

“It is simply extraordinary to read, fifty years later, this collection from the Congress of Black Writers in Montreal in 1968. David Austin has gathered and expertly introduced the interventions of some of the 20th century’s most important intellectuals and militants—these texts remind us of a time when the struggles against racism, capitalism, and imperialism converged on a global scale and advanced a project for liberation. As Austin demonstrates, drawing on these and other black revolutionary texts, this project for liberation was called socialism—a project which cannot be reduced to Europe, and which remains central and necessary today.”

– Asad Haider, author of Mistaken Identity: Race and Class in the Age of Trump

“Moving Against the System powerfully reminds us of the depth and breadth of the black radical tradition and its profound, enduring contributions to anti-imperialist thought and action. But more than this, at a time when such acute insights are badly needed, Austin suggests critical ways to engage with these ideas and histories, to educate and inform today’s struggles to change the system.”

“In Moving Against the System David Austin reveals another dimension of the hidden history of black Canada and the important transnational and emancipatory connections that were forged between black Canadians, Caribbean peoples, Indigenous peoples, and Quebecers during the tumultuous 1960s. Popular accounts of the rebellions across Europe and North America that have become definitive of the spirit of ’68 often exclude the powerful intellectual uprising taking place within Canada’s racialized and colonized communities. Austin takes us back to the Congress of Black Writers to remind us of the sense of possibility and determination that brought so many luminaries of anti-colonial thought to Montreal in 1968.”

“David Austin’s brilliant and inspiring collection from the 1968 Montreal Congress of Black Writers sheds new light on that momentous period and testifies to the centrality of radical black politics to the world-transforming events known as ‘1968’. With white supremacy on the rise once again, the insights contained here provide a vital guide to the waging of revolutionary anti-racist praxis on a global scale.”

– Sunera Thobani, author of Exalted Subjects: Studies in the Making of Race and Nation in Canada

“Moving Against the System includes the work of arguably the most intellectually audacious and progressively visionary political activists to be assembled anywhere in the late 1960s. David Austin’s carefully constructed montage of the leadership, dynamics, and substance of what became an international movement is a revelatory portrait of the past that is no less revealing of the political dynamics and potential of today’s Black Lives Matter, #MeToo, and other activist efforts. A must-read for all who would truly understand why and how the activist history of the 1960s continues to resonate with and to influence current activist politics.”

“In a vital work of historical recovery, David Austin has brought together crucial texts on the centrality of black liberation writing and theorizing to global liberation struggles in the 1960s and early 1970s. Austin provides a wonderful contextual and critical introduction, which makes the contributions of C. L. R. James, Robert Hill, Walter Rodney, James Forman, Stokely Carmichael, and many others not only relevant to but also very much alive for contemporary movement theory and practice. A must-read for all those concerned with struggles against anti-black racism and racist capitalism and for anti-racist revolutionary social transformation today.”

“By casting a fresh spotlight on the proceedings of the landmark 1968 Congress of Black Writers and offering an authoritative assessment of the gathering’s historical context and political significance, David Austin has performed a great service. With the global battle against racism again on the front burner, Moving Against the System could not be more relevant or timely.”

“This collection is a treasure chest of Canadian, Caribbean, and African diasporic history. David Austin is a remarkable archivist, curator, detective, and analyst of this decisive moment.”

“This remarkable collection gathers electric essays from a critical site of the making of a ‘global 1968.’ Masterfully introduced, it includes the work of leading pan-African thinkers and freedom fighters gathered at the most important North American intellectual event of that critical year. The histories and dilemmas that they dissect are ones with which we still very much live.”

“Reading Moving Against the System as an activist and organizer is to experience time folding in on itself. I felt I was reliving the very familiar arguments with which Black liberation activists presently grapple within the context of a radical, 1968 Congress in Montreal. Much of our struggles today are informed in part by some of the men whose speeches and arguments appear in this piece, and to experience how they debated one another across geographic and cultural contexts is markedly compelling. The documentation of this incredibly important Congress in an accessible book format is sure to remain relevant and instructive for years to come.”

“The 1968 Congress of Black Writers marks one of the most important gatherings of radical intellectuals in the 20th century. The speeches collected in Moving Against the System capture a generation of revolutionaries envisioning liberation rooted in self-determination, socialism, and soul. Where else can you find the likes of C. L. R. James, Walter Rodney, Richard B. Moore, James Forman, Stokely Carmichael, and Robert Hill talking revolution to an engaged and sometimes combative crowd? And yet, David Austin’s brilliant and vivid introduction resists hagiography, exposing the meeting’s deep ideological and generational fissures, splits, and exclusions. I couldn’t put the book down.”