The Politics of the Extreme Centre 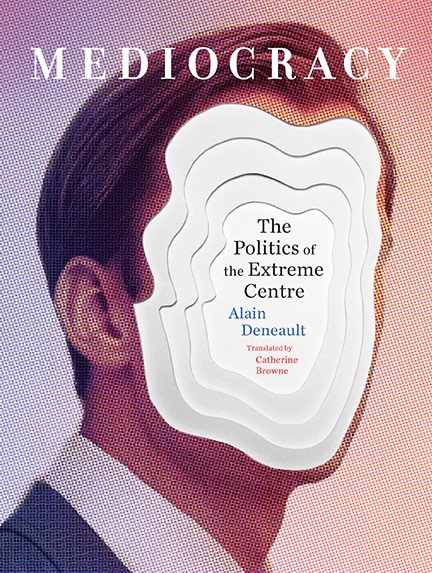 There was no Reichstag fire. No storming of the Bastille. No mutiny on the Aurora. Instead, the mediocre have seized power without firing a single shot. They rose to power on the tide of an economy where workers produce assembly-line meals without knowing how to cook at home, give customers instructions over the phone that they themselves don’t understand, or sell books and newspapers that they never read.

Canadian intellectual juggernaut Alain Deneault has taken on all kinds of evildoers: mining companies, tax-dodgers, and corporate criminals. Now he takes on the most menacing threat of all: the mediocre.

“Those on the left in English speaking Canada and beyond take note, only the mediocre are compelled not to heed Deneault’s call. One could do worse than – and many would likely benefit from – raising the issues Deneault has put forth in Mediocracy within their own circles. An elitism for the people, anyone?”

“Deneault posits that those with average levels of competence rise to power and define success for every facet of contemporary society—from finance to education to the arts in terms of commercial viability—creating a culture of mediocrity with no place for the intelligent, creative, thought-provoking, or non-commercialist. A thoughtful narrative on the vagaries of a society enthralled with conformity and economic viability, Deneault’s book has broad cross-disciplinary interest. Endnotes, not in the French edition, are provided.”

“If we live in an age where gasbags and show-offs increasingly walk the halls of power, Alain Deneault’s brilliant and witty book reveals the truth behind the grandstanding: a crushing and intolerant mediocracy. The extreme average is now the new normal. You know who they are. The brainless politician who acts on a ‘hunch’. Professors who can’t teach without hundreds of pointless PowerPoint slides. Business managers who have absolutely no idea what they’re talking about. Painfully average students. Deneault’s book is essential reading for anyone today who still cares about escaping the insipid banality of neoliberal capitalism.”

– Peter Fleming, author of The Death of Homo Economicus: Work, Debt and the Myth of Endless Accumulation

“In this remarkable, lively book Deneault’s ideas about how we must all be made small that markets be perceived great translates beautifully, both in language and in moment. The nature of domination in our society is precisely imprecise, creating a challenge for the middle theories we use to make sense of living amid the shiny ruins of late stage capitalism. This book advances a theory grand enough for the task of piercing that veil. A thoughtful read!”