Canada’s Social Conservatives in the Age of Rights 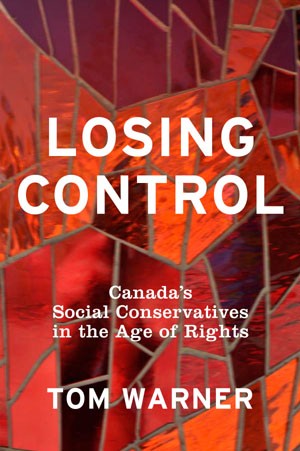 Shedding a bright light on a dark side of Canadian politics, Losing Control critically examines Canada’s social conservative movement and discovers a reactionary, anti-reform insurgency of evangelical Protestants and Roman Catholics. Tom Warner chronicles the religious right’s advocacy on a range of moral issues–from abortion and the regulation of consensual sex to same-sex marriage and moral instruction in the public schools. He finds a movement desperate not to lose control of the state’s moral agenda in an age of Charter rights.

This timely and important book raises truly alarming questions about the close relationship between a resilient, never-say-die social conservative constituency and the political direction of the federal Conservative Party.

A meticulous study… impressive in both scope and detail.

Losing Control is a real contribution to our understanding of Canadian politics. We have precious little serious writing about evangelical Christian involvement in Canadian public life. This wide-ranging chronicle brings together a huge amount of material produced by religious conservatives across the country, covers an impressive array of issues, and presents the material accessibly in its historical and political context.

Tom Warner maps out the moral conservative right wing that queer liberation activists, feminists, and human rights activists have been up against. His meticulous tracing out of the networks of social conservatism from individual religious activists to those currently in positions of power in the Harper government allows us to see both the strengths and weaknesses of our enemies. This book provides critical analysis of the right-wing but also powerful ammunition that we need in our struggles today and in the future if we are to prevent the social conservatives from seizing the agenda.