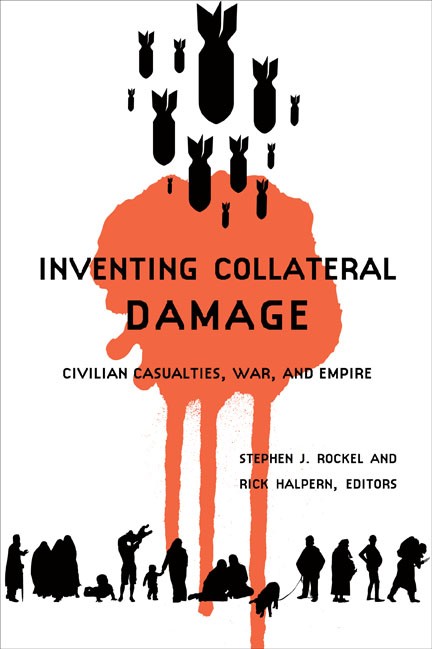 The term collateral damage, a euphemism for civilian casualty, came into usage during the Vietnam War and over several decades became entrenched in U.S. armed forces jargon. But long before the phrase was coined there were non-combatant victims of wars.

Emerging from a major international conference on the subject, Inventing Collateral Damage is a collection of excellent and varied studies of civilian casualty through history: in early modern Europe, 18th- and 19th-century North America, colonial and post-colonial conflicts, the world wars of the 20th century, and the present day.

The collection includes an impressive historical interpretation of the topic by Stephen Rockel and a sensitive conclusion by the noted historian Natalie Zemon Davis.

In this pioneering collection … the case studies of collateral damage to civilians … are uniformly excellent. … A particularly noteworthy feature of the collection is its useful analysis and sensible employment of normative standards concerning the rules of war. Highly recommended.

We may prefer to act as though the crimes that war inflicts on civilians are too horrible to consider, but–as this book correctly insists–those crimes are too horrible to ignore. Here is a book that challenges us to move beyond the moral fog of war’s euphemisms and cover stories.

– Norman Solomon, author, War Made Easy: How Presidents and Pundits Keep Spinning Us to Death

It is often stated that it is only recently that civilians have comprised the majority of casualties in war. This wide-ranging and stimulating collection shows that civilian harm has a long history, especially in colonial wars. The volume explores the many ways in which civilians have been affected, and is a valuable addition to the literature.

This book sets the standard for scholarship on collateral damage. With the issue on the front pages every day in reporting from Iraq and Afghanistan, this is a must-read. It provides a spectacular array of rich historical cases wrapped in astute analysis. Read it, teach it, discuss it, dispute it.

Inventing Collateral Damage is at once a rich and immensely varied exploration of civilian suffering throughout the history of war and at the same time a close examination of the meaning of the current euphemism which gives the collection its title. Rarely has the violence of empire and civil war been so succinctly and powerfully summarized. Yet it also explores, in Timothy Brook’s sensitive essay, “The Deliverer’s Dilemma,” the reaction of those who believe they come as liberators to the terrible destruction they bring with them.

– Marilyn B. Young, Professor of History, NYU, and co-editor of Bombing Civilians: A Twentieth-Century History