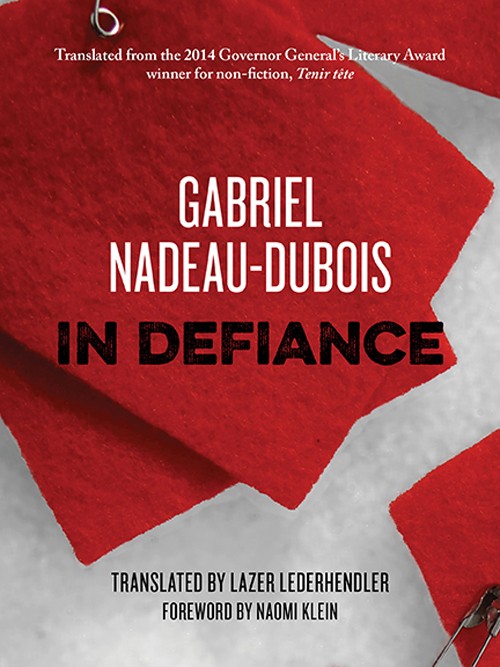 On February 7, 2012, as students in Quebec prepared to vote to go on strike, Gabriel Nadeau-Dubois gave a rousing speech: “What you do today will be remembered. The decision you make will tell future generations who we were. And you already know what is being said today about our generation. That we are the generation of comfort and indifference, the generation of cash and iPods; that we are individualists, egotists; that we don’t care about anything, except our navels and our gadgets. Aren’t you tired of hearing this? Well, I am. Luckily, today we have a chance to prove that it’s not true, that it has never been true.”

The “Maple Spring” saw more than 300,000 students across Quebec protest a tuition fee hike by striking from their classes. Nadeau-Dubois takes readers step-by-step through the strike, recounting the confrontations with journalists, ministers, judges, and police. Along the way he exposes the moral and intellectual poverty of the Quebec elite and celebrates the remarkable energy of the students who opposed the mercenary attitude of the austerity agenda.

We acknowledge the financial support of the Government of Canada through the National Translation Program for Book Publishing, an initiative of the Roadmap for Canada’s Official Languages 2013-2018: Education, Immigration, Communities, for our translation activities.

[In Defiance offers] thorough and intelligent insights about the Maple Spring, and why it was more than just a fight between students and Jean Charest’s government over proposed fee hikes to universities.

In Defiance is a remarkable insider’s account of the largest popular mobilization in recent Canadian history. With wit and clarity, Gabriel Nadeau-Dubois provides an engaging window into the 2012 Maple Spring and the role of the Quebec student movement as one of the leading forces challenging neoliberalism today.

Gabriel Nadeau-Dubois’s Tenir tête brings us behind the scenes of the spring of 2012 so we can hear what the government did not want to hear and what the media were not always able to report. In a simple and direct style, it raises the question of the future of democracy.

I want you to read this book. I read it twice: first in French when it first came out, and then again this past week in English. I enjoyed it both times.

In Defiance is not only a brilliant analyses of the Maple Spring in Quebec, it is also a vibrant, poetic, and insightful call for a new kind of collective politics based on a refusal of the poisonous demands of the neoliberal state. More than a manifesto, In Defiance is a clarion call for a new generation of young people who refuse to be left out of the discourse of democracy.

Gabriel Nadeau-Dubois serves as a compelling guide to the victorious 2012 strike by Quebec students, which defeated a threatened 75% tuition increase. This strike was one of the most successful social movements in North America thus far in the 21st century, mobilizing hundreds of thousands at its height. The story of the 2012 student strike needs to be better known outside Quebec, and this book provides a crucial way in to these events.

The historical significance of Quebec’s colossal 2012 student strike is destined to be the subject of debate for years to come. With incisive clarity and intelligence, In Defiance shines in its analysis of the province’s so-called Maple Spring. Co-spokesperson of Quebec’s largest student union during the strike, Gabriel Nadeau-Dubois places the conflict within the context of a broad neoliberal attack on the Quebec model of socio-economic development, explaining how the movement faced down a barrage of insults, legal intimidation, contempt and violence from journalists, politicians, and the police and persevered to win substantial public support in the streets and at the polls. As ever, Nadeau-Dubois’s voice elevates public discussion about the kind of world we want to live in and will be sure to resonate with readers the world over.

In Defiance is a must-read for today’s students and activists, and for anyone needing a renewal of faith in the future of humanity. Superbly written, with clarity and self-awareness, this book captures the idealism, practicalities, frustrations, failures, and victories of the Maple Spring. In addition to revealing the tactics, day-to-day challenges, and political realities happening behind the scenes of one of the largest student movements in recent history, Nadeau-Dubois shows us that—even against an entrenched government, bolstered in its suppression of the disenfranchised by a wider culture of social apathy— youth, intelligence, and hope can always rise and challenge those in power and, more importantly, the ways of thinking that keep them there.

– Mark Edelman Boren, author of Student Resistance: A History of the Unruly Subject

Gabriel Nadeau-Dubois takes readers through the politics, the debates and the general assemblies that formed the engine of the 2012 student strikes in Quebec. This rare insight, combined with his endearing writing style, makes In Defiance required reading. Any activist who wants to see the stories behind the headlines during this inspiring period must read this book.

– Nora Loreto, author of From Demonized to Organized, Building the New Union Movement

In Defiance is as assertive as the demonstrations that overwhelmed Montreal’s streets in 2012. It is a crucial book for Canadians. It gives insight into events that have shaped Quebec’s political culture, such as the Quiet Revolution, which placed importance on education and called for free tuition. It exposes the breadth and depth of the student movement, which infused Quebec with ideas, reinvigorated our sense of street-level democratic participation, and demanded to know: how and by whom is our future to be shaped?