The Decline and Fall of Ontario’s Electric Empire

By Jamie Swift and Keith Stewart 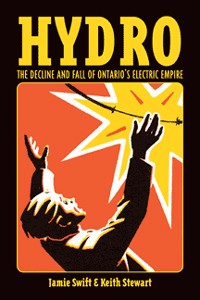 Privatization of power soon became one of the biggest political disasters in Ontario history. Hydro reveals a train wreck that was decades in the making. First there was blind faith in the nuclear option, steeped in ecological arrogance. Then came the promise of marketplace magic.

Jamie Swift and Keith Stewart tell the tale of how it unfolded. It’s a dramatic story of the greed, intrigue, and resistance that led to the dismantling of Canada’s largest crown corporation. A crucial part of the story is how Ontario ignored thirty years of green arguments for conservation and renewable energy.

Based on interviews with former premiers, Hydro insiders, and grassroots activists, Hydro will intrigue anyone wondering how to keep the lights on without frying the planet.

Given that most books on energy policy could be prescribed to cure insomnia, it’s great to find the history of a public utility that is not only informative and accessible, but also graced by a certain panache and sense of humour. Writer/activists Jamie Swift and Keith Stewart have generated an extraordinarily good read in their history of one of the largest energy enterprises in North America.