By Henry A. Giroux 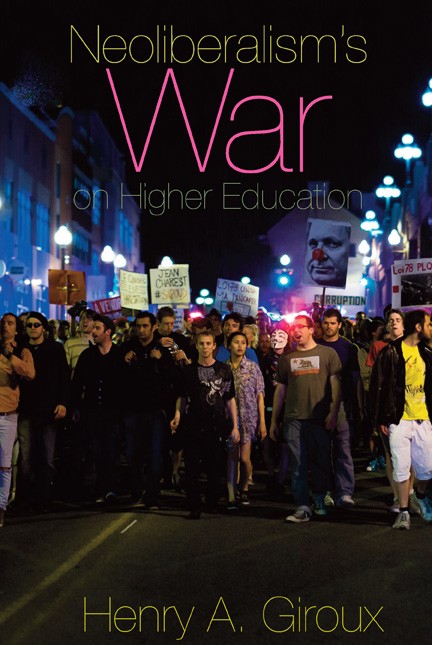 Neoliberalism’s War on Higher Education reveals how neoliberal policies, practices, and modes of material and symbolic violence have radically reshaped the mission and practice of higher education, short-changing a generation of young people.

Giroux exposes the corporate forces at play and charts a clear-minded and inspired course of action out of the shadows of market-driven education policy. Championing the youth around the globe who have dared to resist the bartering of their future, he calls upon public intellectuals—as well as all people concerned about the future of democracy—to speak out and defend the university as a site of critical learning and democratic promise.

Henry Giroux is one of our most important public intellectuals.

Henry Giroux has been the most consistent and outspoken defender and promoter of the life-prospects and human dignity of which young generations were robbed or which they were prevented to recognize as their birth rights.

Professor Giroux has focused his keen intellect on the hostile corporate takeover of higher education in North America… he is relentless in his defense of a society that requires its citizenry to place its cultural, political, and economic institutions in context so they can be interrogated and held truly accountable. We are fortunate to have such a prolific writer and deep thinker to challenge us all

No one has been better than Henry Giroux at analyzing the many ways in which neoliberalism, with its vicious and predatory excesses, has damaged the American economy and undermined its democratic processes. Now, as Grioux brilliantly explains, it is threatening one of the nation’s proudest and most important achievements - its system of higher education.This is a book that is both terrifying and essential.

Henry Giroux remains the critical voice of a generation… He dares us to reevaluate the significance of public pedagogy as integral to any viable notion of democratic participation and social responsibility. Anybody who is remotely interested in the plight of future generations must read this book.