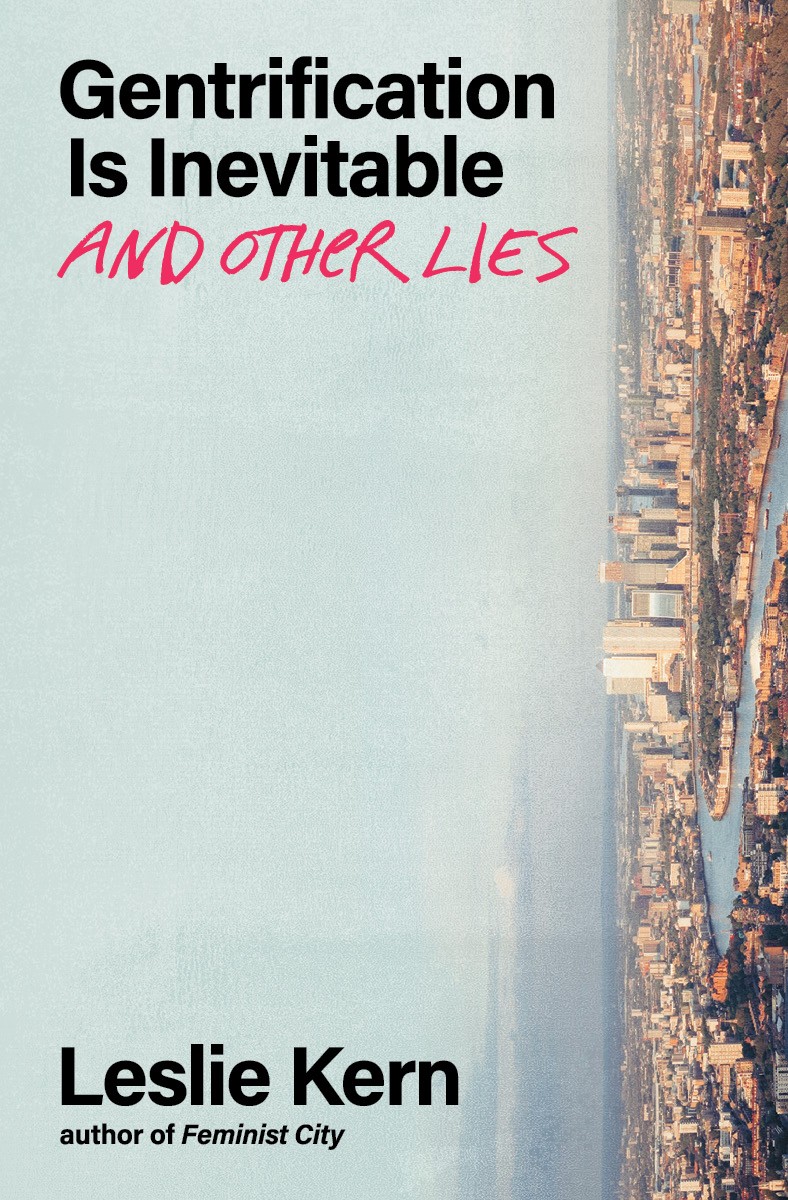 Gentrification Is Inevitable and Other Lies

From the author of the best-selling Feminist City, this urbanite’s guide to gentrification knocks down the myths and exposes the forces behind the most urgent housing crisis of our time.

Gentrification is no longer a phenomenon to be debated by geographers or downplayed by urban planners—it’s an experience lived and felt by working-class people everywhere. Leslie Kern travels to Toronto, Vancouver, New York, London, and Paris to look beyond the familiar and false stories we tell ourselves about class, money, and taste. What she brings back is an accessible, radical guide on the often-invisible forces that shape urban neighbourhoods: settler-colonialism, racism, sexism, ageism, ableism, and more.

Gentrification is not inevitable if city lovers work together to turn the tide. Kern examines resistance strategies from around the world and calls for everyday actions that empower everyone, from displaced peoples to long-time settlers. We can mobilize, demand reparations, and rewrite the story from the ground up.

“In 10 succinct chapters, Kern … defines and outlines the current arguments surrounding gentrification while focusing on the inability to adequately discuss it with each other or within communities. Each chapter contains solid examples of where, when, and why gentrification is appearing in communities, and what the impact is on each respective group. The impact of gentrification on race, class, gender, age, and Indigenous peoples are astutely explored…. A first class analysis and tool kit.”

“If you’ve ever tried and failed to make a compelling argument against gentrification, what you meant to say is in this book, with the facts and figures to back it up. From the forced removal of Indigenous people to the redlining of Black neighbourhoods, from the disenfranchisement of women through suburbanization to the expulsion of the LGBTQ+ community, Kern’s writing is a rallying cry for the decolonization of placemaking and a blueprint for an urbanism rooted in social justice and fairness.”

– Christine Murray, editor-in-chief of The Developer and director of the Festival of Place

“Of all of the processes that are reshaping cities today, gentrification might be the most frequently misunderstood. Leslie Kern’s book does an excellent job of puncturing the myths and exposing the ideologies that make gentrification seem natural, inevitable, and desirable. And with incisive clarity, she develops an account of what a radical, intersectional anti-gentrification politics might look like.”

“If you’ve ever really wanted to understand what gentrification means, this is the book for you. Kern gets beyond jargon, digs into scores of city stories that show how cities have transformed, and offers trajectories for positive change.”

– Shawn Micallef, author of Frontier City: Toronto on the Verge of Greatness

“Leslie Kern confronts gentrification with a multidimensional and intersectional critique, revealing the process of urban ‘improvement’ as an unending campaign of social exclusion and a biting metaphor for making money. She combines her own experience as a city dweller with extensive social research to provide both a call for creative collective action and a good read.”

“A sweeping and fluid new book on gentrification from one of Canada’s best urbanists. Kern expertly weaves theory, concepts, and up-to-date debates about gentrification together, making it accessible not only to urban scholars but to general readers too. A superb book I would have liked to have written but didn’t. A must-read for anyone interested in gentrification.”

– Loretta Lees, director of the Initiative on Cities, Boston University

“In this clear and smartly written book, Leslie Kern brings together some of the most recognizable and essential elements of urban gentrification, making this familiar and ubiquitous term strange, in the most effective and generative ways. Gentrification Is Inevitable and Other Lies arms geographers, cultural theorists, planners, and the general public with an essential understanding of the myths, markings, and formation of global gentrification.”

– Brandi Thompson Summers, author of Black in Place: The Spatial Aesthetics of Race in a Post-Chocolate City

“Leslie Kern is a wonderful writer, and this compelling, important, and highly original intervention in the gentrification debates is a staggering tour de force. At once a devastating critique of the limitations of established perspectives on gentrification and a convincing plea for an intersectional approach, this book offers sparklingly clear analysis and numerous possibilities for political action. Anyone who reads it will never forget it.”

– Tom Slater, author of Shaking Up the City: Ignorance, Inequality, and the Urban Question

“Leslie Kern fills an important gap with this book and provides a service to all those needing language to counter the many, often persistent, arguments made in favour of gentrification. Activists, policy-makers, and scholars alike looking for tools and clear, concise insight into the politics of gentrification will all benefit from reading this book.”

“A concise but also comprehensive account of gentrification, offering solutions and understanding of one of the major social battlegrounds of our times.”

– Danny Dorling, author of Inequality and The 1%