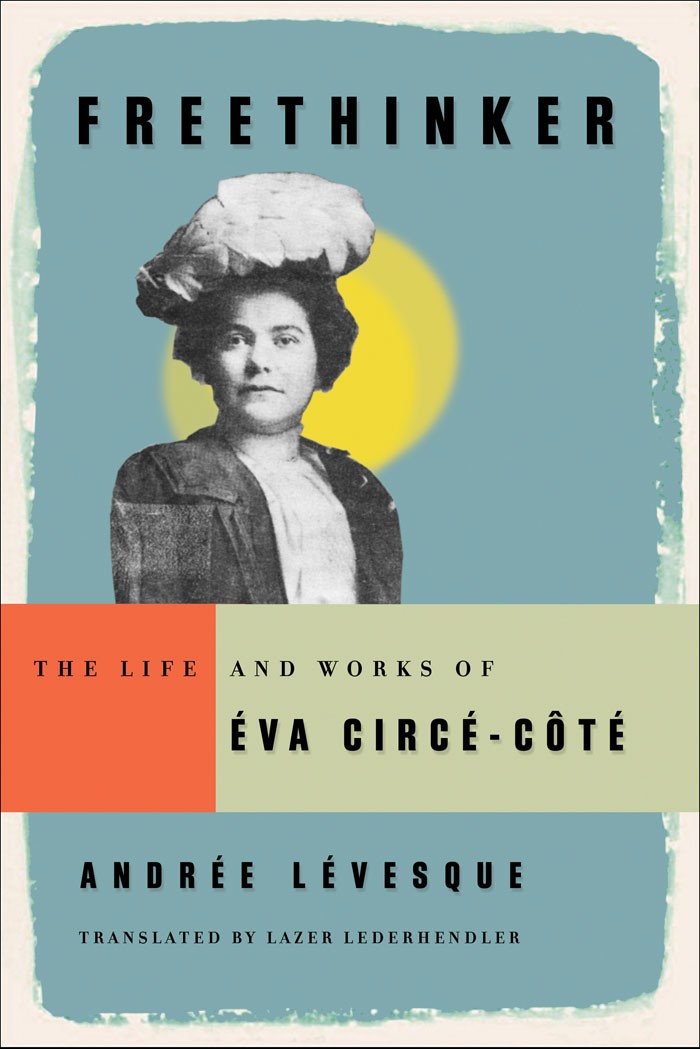 The Life and Works of Éva Circé-Côté

Poet, playwright, and librarian, Éva Circé-Côté was a prolific journalist writing for progressive newspapers under a number of pseudonyms. As a feminist and a freethinker who fought for equality and secularism, she offers a non-conformist perspective on Quebec society and politics in the first four decades of the twentieth century.

This book is another tour de force for Andrée Lévesque. Éva Circé-Côté comes alive as a poet, writer, journalist, playwright, and musician. Lévesque provides the reader with a thorough contextualization of Circé-Côté’s life in Montreal and its cultural scene from the early 1900s to the interwar years. This must-read will delight and inform all those who want to know more about Éva Circé-Côté’s contributions to Quebec history and its ideas

Andrée Lévesque’s book is an important addition to women’s history. Her in-depth portrait of Éva Circé-Côté tells a Montreal story of modernity and presents a nuanced reading of Circé-Côté’s feminism.

How did we ever make sense of the early years of feminism in Canada without understanding the crucial complexities of life in Montreal? In an extraordinary work of biographical research, Lévesque opens up to us a crucial period in Canadian history through the life of a feminist, liberal, Quebec writer of amazing resilience. This is a truly splendid work.

A detailed and complex portrait of Éva Circé-Côté—a passionate intellectual, prolific woman of letters, and provocative social pundit, who lived her life against the sweeping currents of liberalism, patriotism, secularism, and feminism in early twentieth-century Catholic Quebec.

Andrée Lévesque’s book is an important addition to women’s history. Her in-depth portrait of Éva Circé-Côté tells a Montreal story of modernity and presents a nuanced reading of Circé-Côté’s feminism.

Diving into the life and works of Éva Circé-Côté is akin to wandering in the streets of Montréal in the early 20th century, an activity which she wrote about often and earnestly enjoyed. Circé-Côté remained a freethinker until her death, a fascinating woman that could very well have been forgotten without this careful, and recommended, reconstruction.

In Freethinker, Andrée Lévesque unveils a fascinating woman: an uncompromising mind, a skilful and prolific writer, and a pioneer of Montreal’s public libraries. From this insightful portrait and rich analysis, Éva Circé-Côté emerges as a woman with deep convictions, but also with the self-contradictions of a woman with an open mind. Simultaneously a patriot, a feminist, a liberal, and a progressive, she is an essential figure to study in order to better understand the ideas and culture of early twentieth-century Quebec.

This beautifully written and argued book sheds new light on Montreal’s cultural “avant-garde.” Her perspectives on everything from war through nationalism will overturn many readers’ understandings of Quebec ideas and society over the late 19th and early 20th centuries. It is a stunning contribution to the history of Canadian and Quebec women.