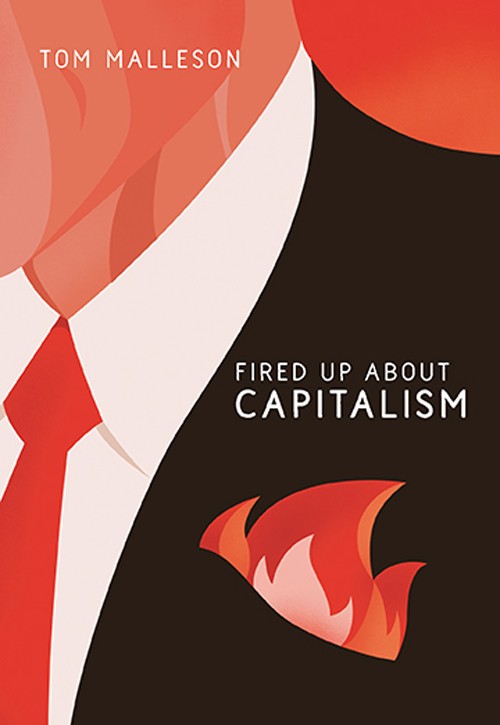 Fired Up about Capitalism

There is no alternative to free-market capitalism. At least that’s what we’ve been told since the 1980s, when Margaret Thatcher first declared the debate over. Politicians daily declare it, journalists parrot it, talk show hosts acquiesce to it, rich people gloat about it, and regular people simply assume it.

Fired Up about Capitalism forcefully argues that this is nothing but a myth. Tom Malleson exposes the reality of contemporary capitalism–from the widening inequality between the 1% and the rest of society, to ecological devastation–and demonstrates that in fact there are many alternatives. By demonstrating a wide range of examples of alternatives from around the world, from the short-term and practical to the long-term and ambitious, Malleson shows that replacing contemporary capitalism is not pie-in-the-sky utopia, but is a real possibility as long as enough of us fight back against injustice and insist that a better world is possible.

Most people know that the world is messed up. But most people also believe that there is no alternative. Clearly and powerfully, Tom Malleson shows that another world is possible and tells us how we can get there.

A generation ago, capitalism’s supposed triumph was seen by many as unassailable. But several years of soaring inequality, the looming threat of ecological disaster, and the erosion of even the pretence of democracy in the political process, have led millions of people, especially young people, to lose confidence in the system. As these young workers and students seek out a concise yet comprehensive account of why capitalism is failing them, and a compelling sketch of some feasible and attractive alternatives to it, they will find no better starting point than Tom Malleson’s lucid and intelligent book, Fired Up about Capitalism.

– Stephen D’Arcy, Associate Professor of Philosophy, Huron University College, and author of Languages of the Unheard: Why Militant Protest is Good for Democracy

Tom Malleson’s Fired Up about Capitalism is a rare and wonderful book. It is wonderful because it provides such a compelling analysis of some of the most pressing economic and political problems of our time along with both short-term and long-term solutions. It is rare because it is written in a way that is rigorous, sophisticated, and nuanced while at the same time being clear, engaging, and accessible, without jargon or pretension. Fired Up about Capitalism should be widely read both by seasoned activists wanting to sharpen their critique of capitalism and their understanding of alternatives, and by interested readers with little background in these issues.

Tom Malleson’s timely book Fired Up about Capitalism provides a clear and inspirational outline to the problems of our collective world’s social, political, and economic crises, as well as some thoughtful arguments for their immediate and long-term resolution. This book presents complex issues with honesty, passion, and scholarship and is filled with that all too rare element of hope. It is well placed to be an inspiration to a generation of activists and students.

Tom Malleson’s Fired Up about Capitalism is an amazing accomplishment: an incisive yet accessible critique of contemporary capitalist society, and a set of clear ideas about how we can collectively do better. Malleson’s arguments are motivated by strong moral reasoning, but always supported by careful empirical evidence. This is an exciting and important book, and one that will surely motivate a new generation of activists.

In clear and concise terms, Fired Up about Capitalism offers an agenda for activists to adopt. Such books are sorely needed to spur on the kind of dialogue that, through agreement and disagreement, can help us forge a collective path forward.

– Umair Muhammad, author of Confronting Injustice: Social Activism in the Age of Individualism

Malleson is a public intellectual of the first rate, brilliantly combining scholarly acumen with activist passion and know-how. In Fired up About Capitalism he offers a frontal assault on the demoralizing notion that “There is No Alternative to Capitalism” (TINA). This short book is not merely a critique of the inequality, hierarchy, greed, injustice, and environmental devastation wrought by neoliberal capitalism. It is also an invigorating defense of radical democracy and a welcome wake-up call about real alternatives that already exist.

– Craig Borowiak, author of Accountability and Democracy: the Pitfalls and Promise of Popular Control and Associate Professor of Political Science, Haverford College

Tom Malleson is fired up against capitalism—his powerful indictment backed by a plethora of well-chosen data. He defends, not only social-democratic reforms, but more radical (and more controversial) long-term institutional changes that would take us beyond capitalism. With so many people in so many countries becoming ever more aware that the current “system” isn’t working, this beautifully written book could scarcely be more timely.”

Tom Malleson once again has hit the critical mark. In clear and crisp language, Malleson pithily summarizes what is wrong with neoliberal capitalism while presenting a compelling case for the many alternatives to it that are within our reach. Shifting from the social, economic, and environmental injustices and inequalities wrought by the status quo and its mantra of “there is no alternative,” to myriad achievable proposals that can proliferate into a different socio-economic reality, it’s all here in a 21st century manifesto of radical democracy from one of Canada’s most insightful activist-academics.

– Marcelo Vieta, Assistant Professor in the Program in Adult Education and Community Development, Ontario Institute for Studies in Education of the University of Toronto