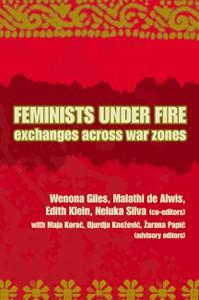 Feminists Under Fire is about women living and working in conflict zones. Focusing on the civil wars in Sri Lanka and the former Yugoslavia, diverse authors face the problems of nationalism, ethnic conflict, and militarized violence. They explore commonalities and differences between the two regions, and consequences for women, their societies, and feminist politics.

Women are neither simply victimized nor empowered by war; their experiences are more complicated. While they suffer from war-related violence and upheaval, some women living in traditional societies find that war releases them from constricting hierarchies. Others find it reinforces conventional gender roles. This ambivalence needs to be examined and understood.

This vibrant collection emerges from The Women in Conflict Zones Network, an international collaboration of activists and scholars.

Through [the authors’] lucid overviews, engaging stories, and insightful analyses, even the most “complicated” conflicts start making sense–political sense, historical sense, and, most importantly, feminist sense! But this book is not just about making sense of what is/was going on in these conflict zones, it is also about finding hope and the right channels to do something about them.