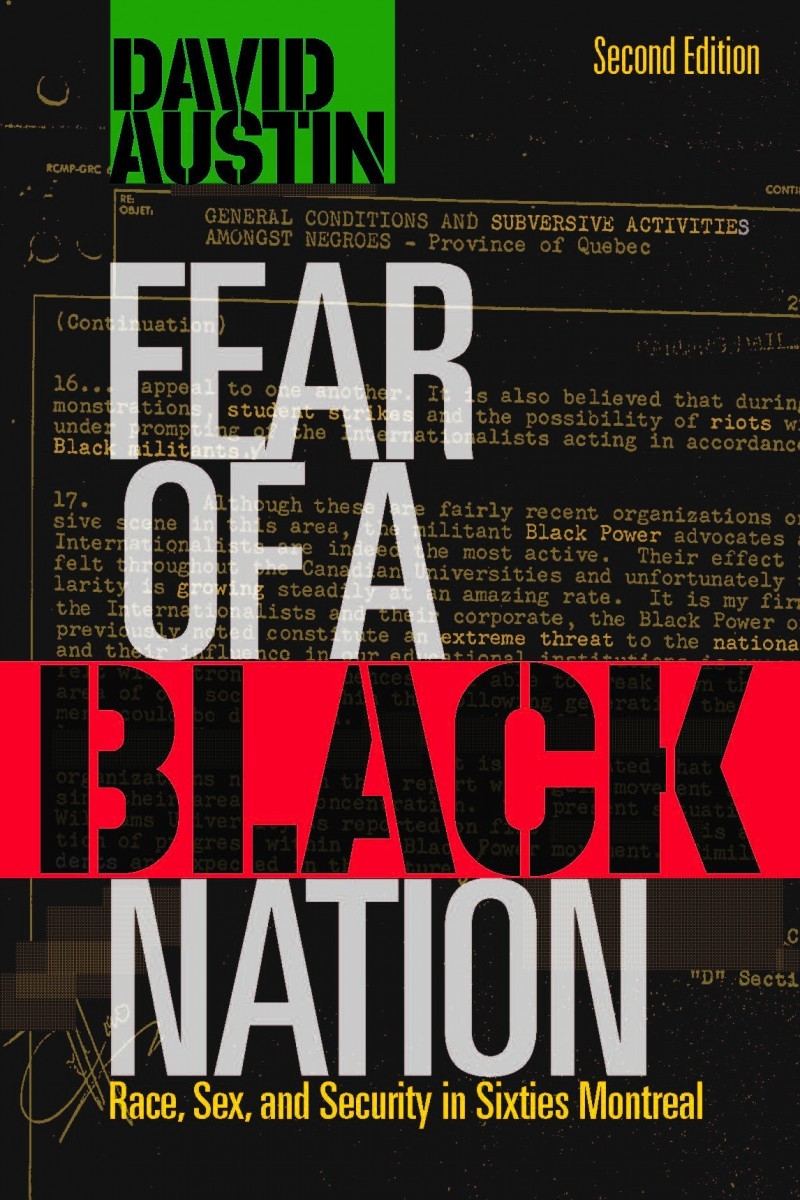 In the 1960s, Montreal was a hotbed of radical politics that attracted Black and Caribbean figures such as C.L.R. James, Walter Rodney, Mariam Makeba, Stokely Carmichael, Rocky Jones, and Édouard Glissant. It was also a place where the ideas of Frantz Fanon, Aimé Césaire, and Malcolm X circulated alongside those of Karl Marx, Jean-Paul Sartre, and Simone de Beauvoir. During this period of global upheaval and heightened Canadian and Quebec nationalism, Montreal became a central site of Black and Caribbean radical politics.

Situating Canada within the Black radical tradition and its Caribbean radical counterpart, Fear of a Black Nation paints a history of Montreal and the Black activists who lived, sojourned in, or visited the city and agitated for change. Drawing on Saidiya Hartman’s conception of slavery’s afterlife and what David Austin describes as biosexuality – a deeply embedded fear of Black self-organization and interracial solidarity – Fear of a Black Nation argues that the policing and surveillance of Black lives today is tied to the racial, including sexual, codes and practices and the discipline and punishment associated with slavery.

As meditation on Black radical politics and state security surveillance and repression, Fear of a Black Nation combines theoretical and philosophical inquiry with literary, oral, and archival sources to reflect on Black political organizing. In reflecting on Black self-organization and historic events such as the Congress of Black Writers and the Sir George Williams Affair, the book ultimately poses the question: what can past freedom struggles teach us about the struggle for freedom today?

Featuring two new interviews with the author and a new preface, this expanded second edition enriches the political and theoretical conversation on Black organising and movement building in Canada and internationally. As the Black Lives Matter and abolition movements today popularize calls to disarm and defund the police and to abolish prisons, Fear of a Black Nation provides an invaluable reflection on the policing of Black activism and a compelling political analysis of social movements and freedom struggles that is more relevant now than ever.

“David Austin’s Fear of a Black Nation is an impressive achievement: original, important, and timely. The analysis of Black politics in Montreal in the late 1960s is quite sophisticated theoretically but accessible. The book will speak to a void in the study of Quebecois and Canadian politics (especially with regard to studies of the left and radical movements), the 1960s, Caribbean politics, U.S. African American politics, and Black diaspora politics.”

– Richard Iton, professor of African American studies and author of In Search of the Black Fantastic (1961-2013)

“Fear of a Black Nation is a powerful reclaiming of the history of radical Black organizing in 1960s Montreal and an insightful analysis of its global ramifications … This book makes a major contribution to the fields of Black history and political studies; it also challenges conventional and left race-blind readings of the histories of Quebec and Canada.”

At the heart of this big-hearted book is Austin’s insistence on history, or as he puts it, the “lived experience of Blacks,” against silence and the abstractions or chimeras of ideology. Readers will learn much about Canada’s black history here, but they will also learn about why it matters to everyone.

“A brilliant analysis of the Black Canadian experience, David Austin’s Fear of a Black Nation challenges everything we think we know about Black Canada and the police state. Drawing on intensive and extensive research that spans several continents, and using RCMP dossiers, Austin tells the story of Black activism in Montreal, and shows us how this activism changed history for Black Canadians, Caribbeans, and Black people worldwide. Without a doubt, it is ground-breaking work.”

“In this superb book, Austin shows us how “the past reverberates in the present.” From the historical fact of slavery in Canada to national security state paranoia towards Black dissent in the 1970s, Fear of a Black Nation artfully weaves a rich tapestry connecting Black struggles for freedom and dignity, the geohistorical significance of Montreal and Black/Caribbean left thought, and the politics of race, gender, class, and nation. Canada, and, indeed, the world, is not yet free from “the burden of race”–this work offers important insights for struggles against the dehumanizing effects of racism and colonialism, and points toward new horizons of possibility for human emancipation.”

“In this path-breaking work, Austin takes us deep into the fascinating world of race, security, and Montreal’s 1960s. When we emerge, it is no longer possible to talk about Canada or Quebec in the same way as before. Fear of a Black Nation is a crucially important book.”

– Sean Mills, Assistant Professor of History, University of Toronto, and author of The Empire Within

“In Fear of a Black Nation, David Austin reveals how the global currents of sixties protest converged on Montreal–while demonstrating, in turn, how the organizing of a small group of Montreal-based West Indian and Black Canadian intellectuals and activists reverberated far beyond the city. Brilliantly conceived, meticulously researched, trenchantly argued, and elegantly written, Fear of a Black Nation upends our understanding of the history of Black internationalism and places Austin among the foremost chroniclers of the history of left radicalism in the Caribbean and North America.”

“An extremely important and timely book–exhaustively researched, expertly executed, and beautifully written. Fear of a Black Nation solidifies David Austin’s place as one of the most important Black writers and intellectuals in North America.”

“David Austin thoroughly analyzes the issues of power, gender, race, and politics that were at play at the time of, and after, the 1968 Congress of Black Writers. The radical left narrative of the Caribbean intersected with Black radical politics in Montreal, and life was forever changed by the rhetoric, the call for sweeping change, and a Pan-African sensibility. Such were the teachings at the Congress…from the likes of Rocky Jones of Nova Scotia, Stokely Carmichael of Trinidad and the Black Power Movement in the United States, C.L.R. James of Trinidad, Walter Rodney of Guyana, and others who would be on a list of who’s who of the Caribbean left. Fear of a Black Nation is a must-read for anyone interested in closing gaps in modern Canadian history.”

– Althea Prince, Professor of Sociology, Toronto Metropolitan University, and author of Being Black