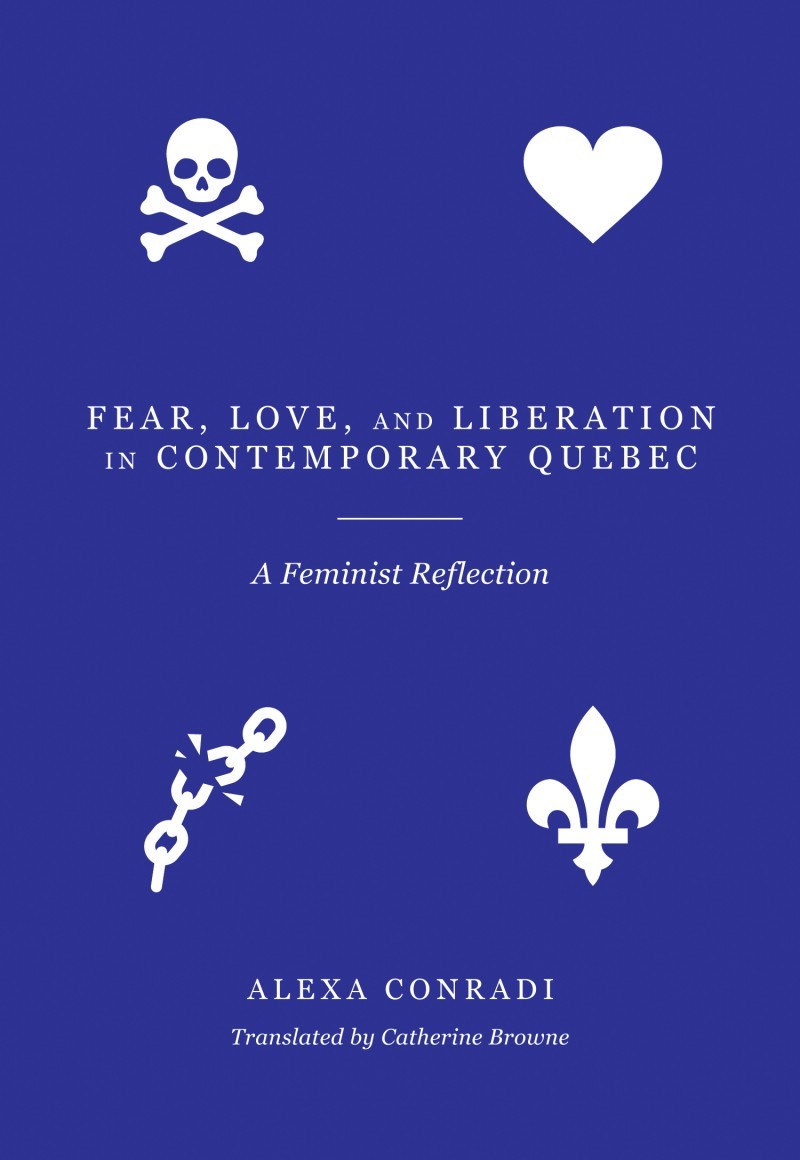 In response to rapid and unsettling social, economic, and climate changes, fearmongering now features as a main component of public life. Right-wing nationalist populism has become a hallmark of politics around the world. No less so in Quebec. Alexa Conradi has made it her life’s work to understand and to generate thoughtful debate about this worrisome trend. As the first President of Québec solidaire and the president of Canada’s largest feminist organisation, the Fédération des femmes du Québec, Conradi refused to shy away from difficult issues: the Charter of Quebec Values, religion and Islam, sovereignty, rape culture and violence against women, extractive industries and the treatment of Indigenous women, austerity policy and the growing gap between rich and poor. This determination to address uncomfortable subjects has made Conradi—an anglo-Montrealer—a sometimes controversial leader. In Fear, Love, and Liberation in Contemporary Quebec, Conradi invites us to take off our rose-coloured glasses and to examine Quebec’s treatment of women with more honesty. Through her personal reflections on Quebec politics and culture, she dispels the myth that gender equality has been achieved and paves the way for a more critical understanding of what remains to be done.

“Fear, Love, and Liberation in Contemporary Quebec is well-researched, nuanced, and thoughtful. The uncomfortable notion that we’re not as open, not as kind, and not as welcoming as we like to see ourselves is an issue for all of Canada, not just Quebec.”

“Alexa Conradi helps us understand the depth of the distortion that capitalism, colonialism, and patriarchy have created. This book is a tool to help us heal.”

– Manon Massé, member of the National Assembly and spokeswoman for Québec solidaire

“Analyzing the problems of Quebec society from a feminist decolonial perspective, Conradi proposes a critical vision largely nourished by her activist experience and invites us to address hard questions, in order to raise the level of public debate.”

“It’s a brave person who dares to shine a light into the corners of Quebec society, uncovering contradictions and flaws that so many would rather deny. Feminist and activist Alexa Conradi—an anglophone Quebecer who learned to love and live comfortably with the other solitude—is sure to make some readers angry with this well-written book.

– Sue Montgomery, mayor of CDN-NDG in Montreal and co-creator of #BeenRapedNeverReported

“With critical insight and empathy, Alexa Conradi cleverly unpacks the self-understandings and contradictions of Quebec society. Her concrete analysis of class inequalities, racism, sexism, and colonialism nurtures collective self-awareness in a context where the “majority” is a national minority prone to deny other forms of oppression. This book is a precious tool to meet one of the main challenges of our time: building emancipatory coalitions beyond the majority/minority divide.”

“Both nuanced and uncompromising, this book is a must-read for those who wish to understand the complexity of feminism in Quebec.”

“Fear, Love, and Liberation in Contemporary Quebec is a must-read for anyone interested in taking on the most difficult issues facing modern feminism through the lens of inclusion.”

“Alexa Conradi takes a raw but necessary look at the ills that affect Quebec society. And in the same breath she explores the possible paths for lasting change in our social organization. A lucid read filled with hope.”

“Alexa Conradi’s discussion of feminism in Quebec and Canada is defiantly intersectional, deeply courageous, and very timely. As feminists and as progressives, we must look within our own movements, do better, and work together in the pursuit of justice and equality. This book helps us to do exactly that.”

“English-speaking Canadians rarely have an opportunity to read about movements and struggles in Quebec. Rarer still are writers who can offer insights and critiques that activists can act on, regardless of the movement in which they work. Alexa Conradi achieves both in this critical reflection on her time in Quebec’s women’s movement.”

“Conradi’s complex story of belonging has helped her develop a keen eye for the fracture lines that shape contemporary Quebec. Fear, Love, and Liberation in Contemporary Quebec is an invitation to uncover the untold, the unseen, and the unheard, not only in Quebec, but wherever complacency has become an obstacle to truth and justice.”

“This feminist book highlights, in a very relevant way, the social justice debates in Quebec. A must-read for all advocates of social change!”